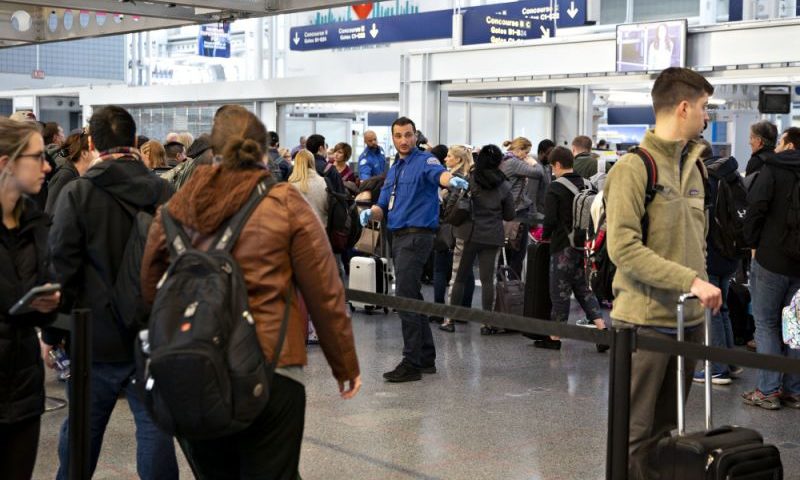 A one-two punch of bad weather and longer airport security lines mean it’ll be a miserable weekend for many travelers in the U.S.

Winter storm Harper, a blizzard that the National Weather Service expects to travel from the Midwest through New England and the Northeast, may leave up to 18 inches of snow. In addition, severe thunderstorms with damaging winds and isolated tornadoes may plague the Deep South, along with heavy rain and flash flooding from the Mid-South to the Mid-Atlantic.

Governors in Pennsylvania, New Jersey and New York declared states of emergency even before the brunt of the storms hit the region.

Delta Air Lines, Southwest Airlines and American Airlines waived rebooking fees this weekend for travelers impacted by Harper. As of 5:40 p.m. in New York, 2,050 flights had been canceled within, into or out of the U.S., the majority from Chicago, Boston and New York, according to FlightAware, a Houston-based airline tracking service. Another 2,445 had been delayed. Over 1,030 flights have been canceled for Sunday, mostly originating in Boston and New York.

Meanwhile, unscheduled absences for Transportation Security Administration employees climbed to 7 percent on Friday versus 3 percent a year ago. Some workers said they aren’t able to report to work due to financial limitations, TSA said in a statement this morning. Though TSA workers are furloughed due to the U.S. government shutdown, they’re still required to work without pay.

One security checkpoint at Baltimore-Washington International Airport closed early on Saturday “due to excessive callouts,” the TSA said on Twitter. Passengers were advised to arrive earlier than usual for evening flights.

Temperatures expected in the Kansas City area on Sunday — where the Chiefs will host the New England Patriots in an AFC Championship game — will be in the bone-chilling 19-28 degree range (minus 2 to minus 7 Celsius range).

AccuWeather warned that the polar plunge of brutal cold could be life-threatening in areas and complicate travel and cleanup efforts from the storm.

Billionaire Tony James has a solution for the $1.5 trillion student debt crisis