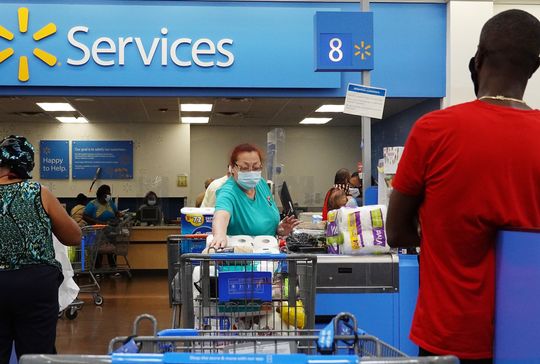 On Monday, the Dow Jones Industrial Average, the S&P 500 and Nasdaq Composite each ended fractionally lower. The Russell 2000 RUT, -0.49% index saw a steeper loss of 0.5%.

“We all know the worries, but this is yet another reminder the U.S. consumer remains extremely healthy,” said Ryan Detrick, chief market strategist for LPL Financial, in emailed comments. “Don’t forget the consumer makes up two-thirds of the economy, so this is another great sign for our economy as we head into the holiday spending season.”

But surging inflation was seen taking some of the shine off the figures.

“On the surface, the outsized gain in retail sales in October probably looks better than in reality it is. Higher prices account for a good chunk of that increase, and the jump start on holiday shopping is pulling forward some portion of the seasonal end of year spending surge,” said Jim Baird, chief investment officer at Plante Moran Financial Advisors.

“Whether that extends through the rest of the year and translates to an acceleration on real consumer spending that provides a lift to Q4 GDP remains to be seen,” he said.

Also, industrial production, which includes factory, mining and utility output, increased at a seasonally adjusted 1.6% in October compared with the previous month, according to the Federal Reserve. Economists polled by The Wall Street Journal expected a 0.8% increase.

Meanwhile, with bond yields at three-week highs, inflation worries remained at the forefront.

“Uncertainty about the persistence of higher inflation continues to dog investor sentiment amid ongoing speculation about the timing of interest rate hikes by the world’s major central banks,” said Raffi Boyadjian, lead investment analyst at XM. “The stronger-than-expected jump in the New York Fed’s manufacturing gauge on Monday was the latest data point to highlight long-lasting supply disruptions and rising costs, giving Treasury yields a nudge up.”

Results from retail heavyweights and others were also rolling in as third quarter earnings reporting season hits the final stretch.