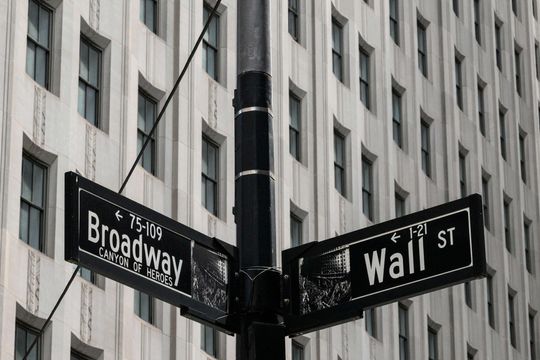 Oil prices end at highest in 3 weeks as OPEC+ announces large output cut since the pandemic.

U.S. stock indexes ended modestly lower on Wednesday, despite briefly turning positive in the final hour of trading, while data showed steady growth in private-sector jobs and in the service sector, indicating more scope for the Federal Reserve to continue to raise interest rates.

Wall Street stocks finished in the red after three main indexes bounced back from earlier losses in the final hour of trade, following a strong September private employment report in the morning.

Data released Wednesday showed that private-sector payrolls rose by 208,000 in September, indicating steady growth and supporting the view that the Fed has enough scope to keep raising interest rates. Economists surveyed by The Wall Street Journal had expected a rise of 200,000.

The report came two days before the closely watched nonfarm payrolls data issued by the Bureau of Labor Statistics. Investors are eying on it for important guidance on the Fed’s policy stance in the November meeting.

Friday’s employment report is expected to show the economy added 275,000 jobs in September, compared with 315,000 new positions added in August, according to a survey polled by Dow Jones.

“That certainly could move the needle,” said Kristina Hooper, chief global market strategist at Invesco. “Again, it doesn’t mean that it actually is going to change the market, but it could be the catalyst for short term rally if we get a disappointing jobs report.”

“But keep in mind, that’s just the anticipation of a Fed pivot based on data. But that does not ensure a Fed pivot. And so it could be one of those short-term rallies like the one we saw earlier this week,” Hooper said.

In other data Wednesday, an ISM barometer of U.S. business conditions in the service sector dipped to 56.7% in September but still showed steady growth and rising employment in a sign the economy is still expanding.

The U.S. trade deficit in August fell to $67.4 billion, the lowest level since mid 2021, paving the way for a resumption of growth in gross domestic product in the third quarter.

The S&P 500 had just enjoyed its largest two day percentage gain since April 2020 on Monday and Tuesday, and the best start to a quarter since 1938, according to Dow Jones Market data.

The bounce followed three quarters of declines, the worst such run since 2008, during which time the S&P 500 fell 24.8% to a near two-year trough as investors worried that the Federal Reserve’s interest rate hikes to crush inflation would harm the economy.

Brian Mulberry, client portfolio manager at Zacks Investment Management, believes the volatility in the stocks will continue because markets are getting a very “consistent message” from the Fed.

“Given what has happened over the last five trading sessions alone, we would be basically telling our clients to tighten your seatbelt a little bit because it’s definitely going to continue to be a bumpy ride,” Mulberry told MarketWatch in a phone interview on Wednesday. “If we get a ‘Goldilocks’ (jobs) report, that would mean decent economic activity is going on. That’s good for earnings overall in the market, but it’s not growing to a point where interest rates would have to be ratcheted up another 125 basis points by the end of the year.”

One major reason behind the rise early this week was the view that the Fed would pivot away from its aggressive monetary tightening.

Johanna Chua, chief Asia economist at Citi, said that though U.S economic growth remained in better shape than other countries and Fed officials continued to sound hawkish, the market risked being wrongfooted by any signs that interest rates could soon peak.

“Even as the overall fundamental setup has not changed… trimming of bearish risk/bearish rates/bullish USD positions has driven a sharp reversal,” Chua said.

Mary Daly, president of the Federal Reserve Bank of San Francisco said Wednesday that the Federal Reserve needs to keep raising its benchmark interest rate in order to cool inflation that hit a 40-year high earlier this year and has shown little signs of cooling. Atlanta Fed President Raphael Bostic will speak at 4 p.m. Eastern.

Meanwhile, the OPEC+ group said Wednesday that it will reduce its collective crude production levels by 2 million barrels a day starting next month, the biggest cut since the start of the pandemic. Oil futures headed higher with West Texas Intermediate crude for November delivery CL00, 0.15% CLX22, 0.14% rose $1.24, or 1.4%, to settle at $87.76 a barrel on the New York Mercantile Exchange.