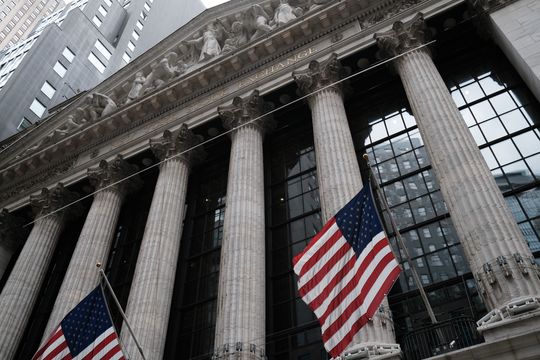 The Nasdaq Composite Index notched its biggest daily gain since May, while Dow industrials and the S&P 500 had their largest percentage climbs in more than a month, after President Joe Biden told Americans the fight against the omicron variant of coronavirus won’t involve “shutdowns or lockdowns.”

Stocks staged a partial comeback following the worst day in more than a year for the Dow and S&P 500 on Black Friday, amid lingering concerns over the new omicron variant of the coronavirus.

In a televised address about the variant, Biden said omicron is a cause for concern but not panic, and the fight against the variant won’t involve “shutdowns or lockdowns.” He also said that “we’ll fight this variant with scientific and knowledgeable actions and speed, not chaos and confusion,” and that vaccines likely offer protection against the COVID strain.

“On Thursday, I’ll be putting forward a detailed strategy outlining how we’re going to fight COVID this winter — not with shutdowns or lockdowns, but with more widespread vaccinations, boosters, testing and more,” the president said during a speech at the White House.

Omicron has been detected in at least a dozen countries and a number of countries have imposed flight bans from countries in southern Africa, where the variant was first discovered. On Friday, the World Health Organization’s technical advisory group declared it a “variant of concern.”

“With Covid dominating headlines, the market is grappling with how rising case counts could impact Fed policy and economic growth,” said Nicholas Gaskell, a portfolio manager at Eaton Vance WaterOak Advisors. For now, “investors are buying the dip” following last week’s selloff, Gaskell wrote in an email to MarketWatch.

Little is known about omicron, but some investors were focusing on preliminary indications of “mild” symptoms among those who had tested positive.

Dr. Angelique Coetzee, the South African doctor who was first to spot the new variant, told the BBC over the weekend that patients she had seen had “extremely mild symptoms.” But she added that it wasn’t clear yet how the disease would affect more vulnerable people, a view that was echoed elsewhere.

A flash poll of financial-market participants taken on Monday showed that only 10% of 1,569 respondents thought the omicron variant will be the biggest topic at year-end, according to Deutsche Bank research. Sixty percent said it would still be an issue of only moderate importance, and 30% said it would be largely forgotten about.

Shares of Moderna Inc. MRNA, +11.80%  rallied for a second session Monday, on hopes for the quick development of an omicron-specific booster vaccine.

Meanwhile, investors will be watching out for the November nonfarm payroll on Friday for a snapshot into the health of the U.S. economy.

“I believe we are seeing a market that is trying to find its way,” Mark Stoeckle, chief executive of Adams Funds ADX, said in an email to MarketWatch. “Investors should understand that what happened on Friday was largely driven by algorithm trading. Fundamental trading was hard to find outside of some managers who are likely trailing the S&P 500 by a large amount and wanted to limit the pain.”

“With the benefit of a bit more information and a few days, today we are seeing what I would describe as more rational trading. Investors are searching among those stocks that were indiscriminately sold on Friday,” Stoeckle wrote.

Retailers remained in focus for Cyber Monday, another big post-Thanksgiving shopping day. Adobe Analytics said online shoppers spent $8.9 billion this year, at the low end of its expectations and slightly short of the $9 billion that was spent in 2020.

Crude-oil futures also rebounded from a plunge Friday, with January WTI crude CLF22, 0.90% settling at $69.95 a barrel, up by 2.6% Monday on the New York Mercantile Exchange following Friday’s loss of 13.1%. Investors are awaiting this week’s OPEC gatherings, with a couple of technical meetings reportedly delayed so that members can assess the variant and price action.

Compared with last year, pending sales were down 1.4%, reflecting how much home-buying activity has cooled from the breakneck pace of last year.