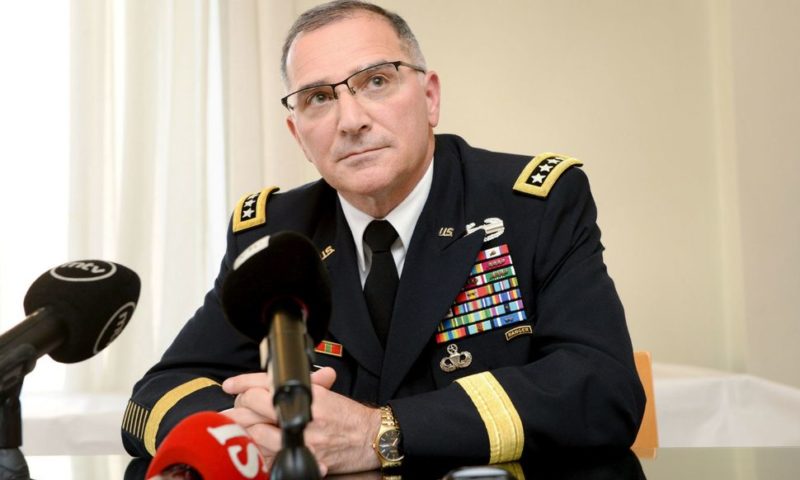 THE TOP MILITARY commander for operations in Europe said Monday the U.S. is considering providing additional lethal aid to Ukraine to deter future Russian naval aggression akin to the recent crisis in the Kerch Strait.

U.S. Army Gen. Curtis Scaparrotti was responding to a query from Sen. Jim Inhofe during a Senate Armed Services Committee hearing about the current disposition of U.S. forces in Europe. The Oklahoma Republican and committee chair asked why despite congressional authorization the U.S. so far has only provided lethal aid to Ukraine in one instance, for Javelin anti-tank missiles.[

Scaparrotti, the commander of U.S. European Command and the top officer for NATO, said the U.S. is considering bolstering the Ukrainian military’s sniper capabilities. But he added of any potential aid shipments, “it has to go through the policy deliberations.” He also expressed concern to the committee about Russia’s modernization of its navy.

“I’m not comfortable yet with the deterrent posture we have in Europe,” Scaparrotti said, when asked about U.S. forces and resources to deter Russia. He later said specifically of Ukraine,

“We need to study their maritime component, their navy.”

The idea of providing lethal equipment to Ukraine has been a contentious issue for American policymakers based on fears it could escalate or provoke a new conflict with Russia. Then-President Barack Obama balked at the idea after Ukraine began open conflict in 2014 with Russian-backed separatists which preceded Moscow’s annexation of the Crimean Peninsula. He opted instead to begin a U.S.-led NATO training mission for Ukraine’s atrophied military. President Donald Trump authorized sending lethal aid to Ukraine in December 2017, and the U.S. began providing Javelin missiles in April following authorization from Congress.

The simmering conflict between Ukraine and Russia had largely existed along Ukraine’s eastern border in a region known as the Donbas. That threatened to escalate in November when Russian naval and coast guard vessels prevented access to the commercially critical Sea of Azov by blocking its only access at the Kerch Strait. Russian forces also captured and detained 24 Ukrainian sailors at that time, and Russian courts have ruled to continue their detention multiple times since.