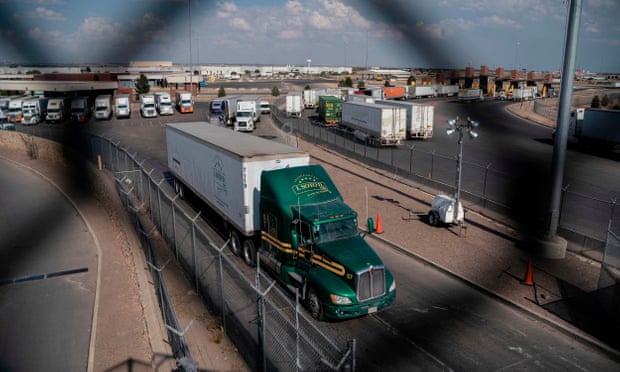 Donald Trump’s trade wars with China, Mexico and Europe have sent global investment tumbling, according to a World Bank report that forecasts worldwide growth this year will slip back to levels not seen since 2016.

The Washington-based lender to developing world countries said in its half-yearly global health check that spiralling political uncertainty was to blame for a slowdown in trade and a collapse in investment spending that will push down GDP growth to 2.6% this year “before inching up to 2.7% in 2020”.

The decision by the Trump administration to impose higher tariffs on Chinese imports and prolonged Brexit uncertainty were among a string of events to increase the World Bank’s policy uncertainty index to a record high.

The report’s gloomy findings were echoed in a speech on Tuesday by the US Federal Reserve chair, Jerome Powell, who pledged to take “appropriate” measures to protect the US economy from the impact of trade wars.

In what was widely seen as a hint that the Fed could cut interest rates in the coming months if the US economy cools, Powell told a monetary policy conference in Chicago that the central bank was “closely monitoring the implications” of ongoing trade disputes.

He said: “We don’t know how or when these issues will be resolved. As always, we will act as appropriate to sustain the expansion.”

Stock markets tumbled last month as traders began to fear an escalation in Washington’s tit-for-tat with Beijing over import tariffs. Oil prices have tumbled and investors have piled into safe haven assets such as gold – with prices up 4% on Tuesday – and German sovereign bonds.

Trump warned Mexico last week that it could face higher tariffs on all its exports to the US if it failed to reduce migration. Washington said a 5% tariff on all goods would be imposed as early as next week and rise to 25% by October.

Manufacturing output across the world has been especially hard hit, with surveys showing a sharp decline in growth across most regions. In the UK, a major survey found manufacturing contracted last month. The picture was gloomier still across Ireland and continental Europe, where output slowed at an even faster pace.

The World Bank said emerging economies in Asia, South America and Africa were constrained by sluggish investment “and risks are tilted to the downside”.

It said in the report, Global Economic Prospects: Heightened Tensions, Subdued Investment, that rising trade barriers increased the financial stress on trade-dependent economies, such as Turkey, and created sharper-than-expected slowdowns in major economies, especially in Europe.

Developing-world governments have reacted to the fall in private sector investment by borrowing to fill the gap, increasing the risk of financial instability should global growth slow further.

Malpass, who was appointed earlier this year to succeed previous president Jim Yong Kim, added that developing-world countries should hold back on borrowing further funds unless it was for growth and investment.

“It’s urgent that countries make significant structural reforms that improve the business climate and attract investment. They also need to make debt management and transparency a high priority so that new debt adds to growth and investment.”

Some countries expected by the World Bank to see an improvement in GDP growth this year have already started to go backwards, according to recent figures.

South Africa’s economy suffered its worst quarter since the financial crisis. The economy shrank at an annual rate of 3.2% in the first three months of 2019, knocking it off course from the 1.1% growth expected by the World Bank this year.

South Africa’s manufacturing, mining and agricultural sectors all shrank, in a blow to the newly re-elected president Cyril Ramaphosa. Agriculture contracted by 13%, mining fell 11%, while manufacturing decreased by 8.8% year-on-year.

Australia’s economy has also slowed, forcing the central bank to reduce interest rates to a record low of 1.25%.