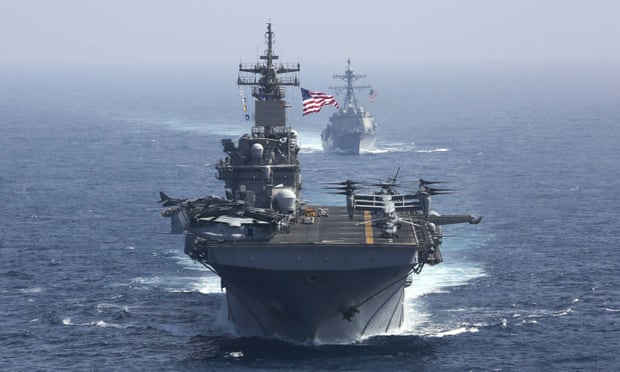 America’s “hit them in the nuts first” diplomacy is helping put the Middle East on a dangerous trajectory towards a regional war, Alistair Burt, the UK’s minister for the region until last month, has warned.

On the eve of Donald Trump’s state visit to the UK, Burt told the Guardian what it has been like to be on the frontline of “America First” diplomacy, where “in every argument America has to win and someone has to lose”.

After two spells as Middle East minister covering five years, Burt is the first front-rank former minister to discuss the transatlantic relationship in the Trump era in such honest terms.

“America at present does not believe in compromise – it is a case of hitting them in the nuts first, and sooner or later they follow,” he told the Guardian. “It is a not unfamiliar technique, and not always unsuccessful. And [Trump’s] proud of it. But subtlety has its place in modern diplomacy too.”

He said Trump’s attitude to Iran, which has seen him take the US out of the landmark 2015 nuclear deal negotiated between the Obama administration, the European Union and Iran, and reimpose sanctions, risked more instability in the region.

“Behind Trump is this nexus of people that have a very different attitude to Iran than the previous administration,” he said. “There is just a fear that someone somewhere will look for provocation.

“Everyone must realise that war in relation to Iran is genuinely insane and simply cannot work. This idea that masses of troops can be assembled on the border, or there is a surgical strike, is so incredible. To have negotiated the Iran nuclear deal and then to talk about surgical strikes is a dreadful failure of diplomacy.”

He described John Bolton, Trump’s national security advisor, as someone who “has long had a barely concealed aggressive stance towards Tehran, and has now succeeded in a seriously influential role”. Bolton has frequently taken an ultra-hawkish line against Iran, pushing regime change and announcing on Thursday the US will present evidence to the UN security council that Iran was behind the attack this month on oil tankers in the Gulf.

“There might be a genuinely deterrent effect, of course, from his heated rhetoric – ‘Would he do it? Yes, he might’ – which could work to the advantage of peace,” Burt said of Bolton. “But who knows?”

The former minister said it was clear the “bludgeoning stick is being beaten over Iran” but doubted a policy of maximum pressure would succeed.

“The Iran crisis cries out for negotiation, but instead of bringing parties in and saying ‘This is what we need to do’, the posture is ‘It is blindingly obvious that these people are villains and if you are not for us, you are against us, and you will have to pay the consequences.’

“We share their concerns, but that approach does not bring people around the table or, seemingly, end the threats.”

He, however, called on Iran to show restraint in Yemen, where it backs the Houthi rebels against a Saudi-led coalition. “I cannot understand why they are taking such a risk for something that means so little to them,” he said, adding that Iran could not exercise influence in Yemen as it does in Lebanon through its Hezbollah proxies. “Iran has no serious reason to be present in Yemen and it is quite clear that this conflict cannot end with Sana’a as the new Beirut. That is no recipe for peace for the Yemeni people.”

Burt stressed that Iran, and others in the region, must compromise, but challenged the belief that sanctions were the most effective route to achieve this.

“In the past year, there has been no evidence that US actions have changed the way Tehran has worked, in fact, it allows Tehran to double down. The Iranian Revolutionary Guards Corps is more powerful and the hardliners are able to isolate the reformers.”

He added that the US threat to impose sanctions on Europe for trading with Iran was “pretty worrying” and marked a new moment in foreign policy.

Burt admitted the UK Foreign Office had tried hard to persuade the US not to quit the nuclear deal last year, and probably misled itself into thinking it might be winning the argument.

“In hindsight, I suspect we were not close at all because it was becoming clear that the standout feature of Trump, and this is to some degree a credit, is that the president was determined to deliver on his election pledges and leaving [the Iran deal] was one of those signature issues.

“It does not matter how out of line the decision, he had said he would do it and he does. It’s, however, a doubtful virtue – it’s the quality of the decision which must ultimately count”.

Burt called for a grand bargain in the Middle East to allow the region to focus on issues such as the climate crisis while lowering the risk of conflict. “If nothing changes, this is going to get worse and somebody somewhere is going to do something stupid and you will have the modern equivalent of the Archduke being shot in some nameless street in Sarajevo.

“Everyone is on a really dangerous trajectory. Each actor is motivated by fear of one another.”