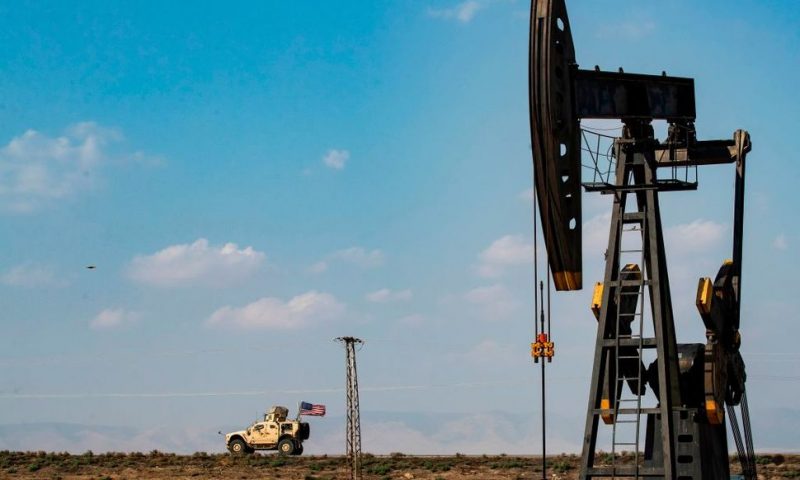 The defense secretary said Monday that securing Syria’s oil fields was about defeating ISIS and helping the Kurds. Trump said the U.S. ‘should be able to take some also.’

PENTAGON LEADERS AND President Donald Trump diverged Monday on the rationale behind keeping U.S. forces in northeastern Syria, with the president renewing his insistence that the U.S. will control Syrian oil fields.

“We’re keeping the oil,” the president told a gathering of police chiefs in Chicago on Monday. “Remember that. I’ve always said that: Keep the oil. We want to keep the oil – $45 million a month. Keep the oil.”

The comments stood in stark contrast with remarks just hours later by Defense Secretary Mark Esper, who spoke at a press conference a day after Trump revealed the U.S. military targeted and killed Islamic State group leader Abu Bakr al-Baghdadi. Esper appeared testy when pressed about the U.S. reasons for pulling back from areas where they had been fighting with Kurdish troops known as the Syrian Democratic Forces and focusing instead on the president’s new order of securing the Syrian oil fields.

“The fundamental purpose,” Esper said, “is to deny those oil fields access to ISIS, in order to prevent ISIS resurgence.”

Esper, using an alternative name for the Islamic State group, also said the funds and resources produced by those oil fields could support America’s Kurdish allies. Kurdish troops were instrumental in the U.S.-led campaign to defeat the terrorist network Baghdadi founded and have in recent weeks come under attack by Turkey, a NATO ally.

In explaining the legal and strategic purpose behind the new U.S. presence in northeast Syria, Esper did not attempt to reconcile his comments with the reason that Trump has touted repeatedly since first announcing Baghdadi’s death early Sunday: The U.S. should “be able to take some also.”

Trump’s statements are not only divorced from reality, experts say, but illegal, and endanger American interests in the region.

“President Trump is feeding into the propaganda coming from [Syrian President Bashar] Assad, Russia, and Iran that the Americans are the imperialists in Syria,” says Nicholas Heras, a fellow at the Center for a New American Security’s Middle East Program.

Statements such as these give these other powers vying for greater influence in Syria more justification for launching attacks against Americans or their local partners on the ground, by claiming they are protecting a sovereign nation’s natural resources from outside invaders, Heras says.

“Trump has made the job of U.S. forces in eastern Syria more difficult and dangerous,” he says.

The president’s insistence on exploiting Middle Eastern oil riches in exchange for the costly American troop deployments there over the last two decades is hardly new. But he has escalated his rhetoric in recent days, emphasizing new enthusiasm for keeping U.S. forces in Syria – a principle to which he flatly objected mere weeks ago – that, he says, will benefit the U.S.

“We’re out. But we are leaving soldiers to secure the oil. And we may have to fight for the oil. It’s OK. Maybe somebody else wants the oil, in which case they have a hell of a fight. But there’s massive amounts of oil,” Trump said Sunday morning, first announcing Baghdadi’s death at the hands of American commandos and expanding on his new order earlier this month to focus on Syrian oil.

“What I intend to do, perhaps, is make a deal with an ExxonMobil or one of our great companies to go in there and do it properly,” Trump said.

Trump later offered an unsourced anecdote that experts say contradicts realities on the ground, saying that the Iraqi government gave deference to foreign oil companies outside America to develop contracts to produce oil in that country. The president said he intends to ensure American business dominance with at least these Syrian facilities.

The disparity between the president’s remarks and those of the Pentagon likely centers on legality, says Will Todman, an associate fellow with the Center for Strategic and International Studies’ Middle East Program. The Obama administration in 2014 entered Syria on the shaky premise of hunting affiliates of al-Qaida – which the Islamic State group formally denounced – allowed broadly under a 2001 law in the aftermath of the Sept. 11 attacks. Defense officials now seem to be emphasizing the counterterrorism aspect of its mission to avoid the appearance that U.S. interests lie only in taking another country’s natural resources.

“I also think this is about messaging,” Todman says. “Arguing that the United States should benefit economically from its presence in Syria may play well with parts of the domestic U.S. audience but would be seen as deeply problematic by most others.

“The defense officials are trying to better control the messaging to lessen the possibility of an international backlash against the new U.S. strategy,” he says.

In his subsequent statements, Trump has acknowledged that the oil infrastructure in Syria requires massive improvements to become operational and profitable again. Others point out that if anything were to happen to the oil fields the U.S. now secures, it wouldn’t happen soon.

“It’s unclear to me that they can ever get them back into production, and certainly not quickly,” says Amy Jaffe, director of the Council on Foreign Relations’ Program on Energy Security and the Environment, who has monitored Syria’s oil infrastructure closely.

The Islamic State group mismanaged the oil fields around Deir ez Zor, where U.S. troops are now operating, which, combined with black market operations to steal oil from pipelines, has left the production facilities inoperable. The U.S. also targeted these facilities during a controversial bombing campaign in the early months of the war against the Islamic State group to eliminate its sources of income.

“One estimate back in the day was that if Syria’s army took the fields back, it would take the Syrian oil industry five years to rebuild and try to restore those fields,” Jaffe says.

David Butter, an associate fellow with London’s Chatham House, says Trump’s plan is not realistic, given the relatively modest volumes of oil involved at the Syrian facility and the difficulty of inserting an American company into the oil sector of Syria – a country torn apart by war for almost a decade.

“I suspect this is generally discounted as Trumpian rhetoric directed at a domestic audience,” Butter says. He doubts the divergence between Trump’s perspective and the Pentagon will cause much concern. “It is hardly new.”