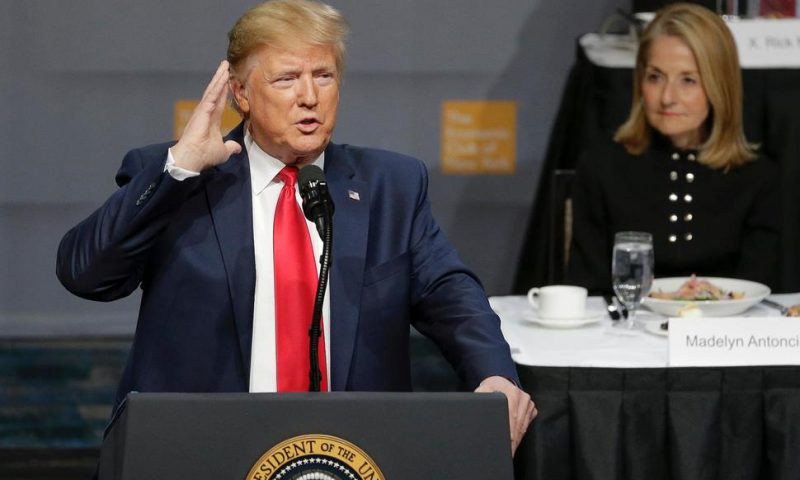 President Donald Trump is claiming credit for the nation’s strong economic performance under his leadership in a speech at the Economic Club of New York Tuesday.

NEW YORK — Despite a slowing economy, President Donald Trump declared Tuesday that the United States was enjoying a “boom the likes of which we have never seen before!”

Trump told the Economic Club of New York that “we have delivered on our promises — and exceeded our expectations by a very wide margin.”

His remarks were delivered to an audience of powerbrokers and affluent business leaders, but his political future may depend on whether voters in the Midwest and Sunbelt believe that he has fought for their own financial well-being.

The president faces reelection next year in a relatively healthy economy, yet student debt, high medical costs and rising inequality have given Democrats seeking the presidency inroads to say that only a privileged few have genuinely benefited from the Trump era.

“Our democracy has been hijacked by the rich and the powerful. They make it work for themselves, and they leave everyone else behind,” Massachusetts Sen. Elizabeth Warren told a major Democratic Party fundraiser and dinner in Iowa earlier this month.

Despite his congratulatory rhetoric, Trump has not fulfilled many of his grandiose promises for the economy.

Growth in the most recent quarter slowed to an annualized 1.9% — a far cry from the gains of “4%, 5% and even 6%” that Trump said his 2017 tax cuts would make possible. The president has not been able to boost the U.S. steel industry with tariffs, while coal has been supplanted as an energy source by natural gas.

Unemployment is near a five-decade low of 3.6%, a point of pride for Trump. The job gains defied the forecasts of many government economists who anticipated less hiring due to an aging population. Yet the falling jobless rate is also a continuation of a trend that started during Barack Obama’s presidency as the economy has been expanding for more than a decade, the longest period of growth in U.S. history.

The president took a combative tone at times, dubbing China a cheater on trade even as he seeks an initial settlement to calm an 18-month trade war that has hurt U.S. manufacturing output as tracked by the Federal Reserve and industry groups.

The administration has launched tariffs and threated additional import taxes, disrupting supply chains even as the overall U.S. trade deficit has increased 15% during the Trump administration.

“I will not say the word ‘cheated,’ but nobody has cheated better than China,” said Trump.

Trump also attacked the Federal Reserve for not slashing a benchmark interest rate to a near-zero, a level that historically would have signaled an economy in crisis. But the president sees European nations with negative interest rates on their government debt and views that as free money that puts the United States at a competitive disadvantage.

The president also went after Democrats who have favored plans to address inequality and climate change, suggesting that that the economy would be crushed if he lost re-election in 2020.

He addressed the club in the same midtown Manhattan ballroom where he celebrated his election to the White House in 2016.

When the applause was slow in coming after Trump declared he had delivered on his promises, the president jokingly said, “Thank you. I was waiting for that. I almost didn’t get it.”

No. 1 Milk Company Declares Bankruptcy Amid Drop in Demand