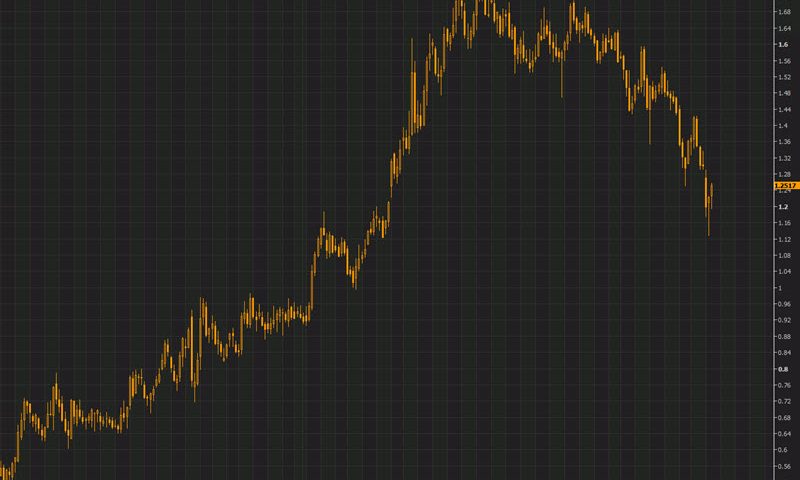 Treasury prices remained under pressure Thursday, with the yield on the 10-year note rising to 1.30% after dipping to a five-month low at the beginning of the week.

But European yields extended a decline as the European Central Bank adjusted its forward guidance in keeping with its newly adopted inflation target.

What are yields doing?

The ECB left interest rates and asset purchases unchanged, while altering its forward guidance on rates to align with the asymmetric inflation target of 2% adopted after its recent strategy review. The ECB previously aimed to keep inflation near but just below 2%.

In a statement following its policy meeting, the Governing Council said it expects “key ECB interest rates to remain at their present or lower levels until it sees inflation reaching 2% well ahead of the end of its projection horizon and durably for the rest of the projection horizon, and it judges that realized progress in underlying inflation is sufficiently advanced to be consistent with inflation stabilizing at 2% over the medium term.” The ECB said this “may also imply a transitory period in which inflation is moderately above target.”

The statement was largely in line with expectations for the ECB to maintain a dovish stance, analysts said. The yield on the benchmark 10-year German government bond TMBMKDE-10Y, -0.401% extended a decine, falling 1.9 basis points to -0.409%.

Some U.S. jobs data is also on tap, with the release at 8:30 a.m. of weekly data on applications for employment benefits. Economists expect first-time claims to fall to have fallen to 348,000 in the week ended July 17 from 360,000 the previous week.

“This was a bit like old wine in a new bottle; the communication has changed somewhat but in terms of substance the ECB remains very dovish, putting a cap on any tapering speculations,” said Carsten Brzeski, global head of macro at ING, in a note.

As for Treasurys, the bounce in yields “reinforces the notion that the bullish price action will need further fundamental justification to proceed” and is unlikely to come before next week’s Fed meeting and any hints the spread of the delta variant of the coronavirus that causes COVID-19 have altered policy makers’ stance, wrote analysts Ian Lyngen and Ben Jeffery of BMO Capital Markets.

“We’re encouraged by the backup in yields as it allows for a fresh round of position-squaring and given how shallow the move has been, it is also constructive for our lower rates thesis going forward,” they said.