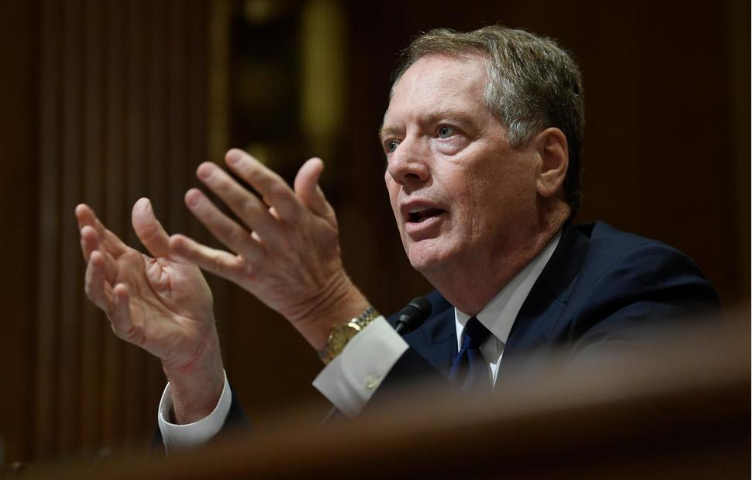 WASHINGTON — The top U.S. trade negotiator said he will meet with his Chinese counterpart to discuss a trade dispute between the world’s two biggest economies before a summit next week in Japan between Presidents Donald Trump and Xi Jinping of China.

Appearing before the House Ways and Means Committee Wednesday, U.S. Trade Representative Robert Lighthizer said he plans to speak with the top Chinese negotiator by phone in the next day and a half. Then the two are expected to meet, along with Treasury Secretary Steven Mnuchin, in Osaka ahead of the Trump-Xi summit at the Group of 20 meeting June 28-29.

Lighthizer did not name his counterpart. But Vice Premier Liu He has led the Chinese delegation in past talks.

Eleven rounds of talks have failed to resolve the differences between the world’s two biggest economies. The U.S. accuses China of using predatory tactics in an aggressive push to supplant American technological dominance. These, the U.S. says, include stealing trade secrets, forcing foreign firms to hand over technology and unfairly subsidizing Chinese tech firms.

China accuses the United States of trying to keep an emerging rival down. Beijing also is reluctant to scale back its aspirations to make Chinese companies world leaders in cutting-edge technologies such as artificial intelligence and autonomous cars.

Trump has pointed to the U.S. trade deficit with China — a record $381 billion last year — as a sign that China is pursuing abusive trade practices. “We have a very unbalanced relationship with China, and we have one that risks literally the jobs of the future for America,” Lighthizer said Wednesday. “So, it’s very important that we get this relationship right.”

The United States has slapped 25% tariffs on $250 billion worth of Chinese imports. The Chinese have counterpunched by targeting $110 billion in U.S. products.

“From the very beginning, China made it clear that we do not want a trade war,” Wang Hejun, a senior official at the Chinese Ministry of Commerce, said on the Fox Business Network’s “After the Bell” program on Wednesday. “But China will give no ground on matters of principle.”

Until last month, it appeared that the two countries were edging slowly but steadily toward a deal. But then the U.S. accused China of reneging on commitments it had made in earlier rounds of talks. Negotiations stopped, and the Trump administration rolled out plans to tax another $300 billion in Chinese imports, extending the tariffs to everything China ships to the United States.

The threat of an escalation in the dispute has rocked financial markets and clouded prospects for the global economy. In seven days of hearings that began Monday, hundreds of businesses are urging Lighthizer’s office to rethink the plan to expand the China tariffs.

On Tuesday, Trump tweeted that he’d spoken on the phone with Xi and that the two leaders would meet in Osaka. But it’s still unclear when the two countries’ negotiating teams will resume detailed talks.