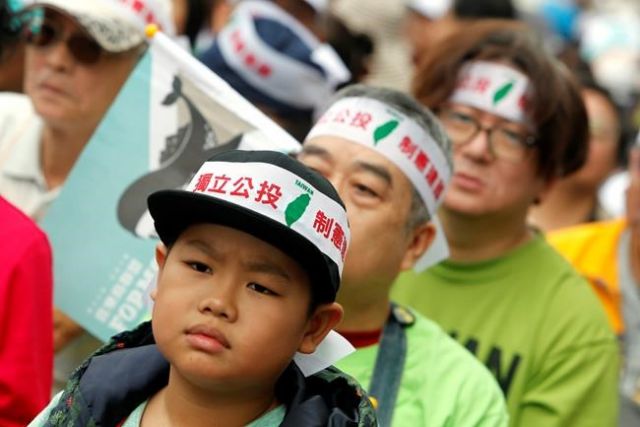 Thousands of pro-independence demonstrators gathered in Taiwan’s capital on Saturday to express their disapproval with China’s stance toward their island.

China cut off contact with Taiwanese President Tsai Ing-wen’s government shortly after her inauguration in 2016 and has been ratcheting up diplomatic, economic and military pressure on Taiwan in a bid to compel her to agree to Beijing’s insistence that the self-governing island democracy is a part of China.

“I want to loudly say no to China,” said 43-year-old demonstrator Ping Cheng-wen, who is self-employed. “I just don’t agree with China’s rhetoric. We have our own sovereignty, and Taiwan is a country.”

Another demonstrator at the rally in Taipei, Kuo Jung-min, an 85-year-old Presbyterian church pastor and Hebrew language professor at Taiwan Theological College and Seminary, said pro-unification advocates should move to China if they think it is a better place to live.

“We have to be real Taiwanese, not fake Chinese,” Kuo said. “There is no use being Chinese. Those who advocate pro-unification still live in Taiwan. If China is that good, why don’t they just move to China?”

In an Oct. 10 National Day address, Tsai called on China not to be a “source of conflict” and pledged to boost Taiwan’s defences against Beijing’s military threats. Tsai said the best way to defend Taiwan was to “make it indispensable and irreplaceable to the world,” while remaining nonconfrontational in its attitude toward China.

China and Taiwan separated amid civil war in 1949 and China considers the island part of its territory to be taken control of by force if necessary.