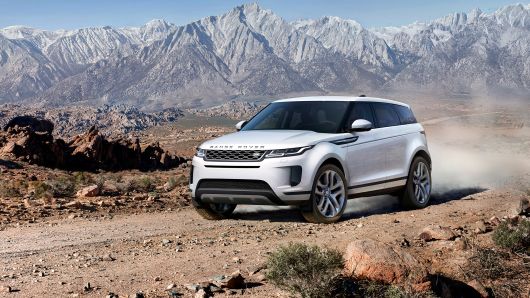 Iconic off-road automaker Land Rover is sprucing up a model that has become one of hottest sellers in the rapidly growing luxury compact sport utility vehicle segment.

When the Range Rover Evoque makes its global debut on Thursday, it will be the first time the popular and relatively affordable vehicle has been refreshed since 2015.

The Evoque is often credited with being a pioneer in the compact luxury SUV segment. That once small slice of the market is now “absolutely on fire,” as buyers shift further toward crossovers and SUVs, Kelley Blue Book analyst Rebecca Lindland told in an interview.

In 2018, entry level luxury SUVs are not only the largest luxury segment, but now account for more than one in three luxury sales overall in the United States, said Jeremy Acevedo, manager of Data Strategy for Edmunds. It became luxury’s best selling segment in 2016.

The Evoque was first producted in 2011, and sales hit a high of 12,157 units in 2015 when the vehicle was last revamped. They have fallen since — a result of the Evoque’s age and the release of even more affordable vehicles in Land Rover brand, such as the Discovery Sport.

This model will be the first to introduce some new features for the entire brand, a sign of how important this segment has become. It will offer Land Rover’s first “mild hybrid” system, which means it can shut the gasoline engine off whenever the car is coasting, braking or stopped. Land Rover has a plan to offer some sort of electric or hybrid version for its entire lineup by 2020.

The Evoque has been a particularly smart move for the company. It is one of the brand’s cheapest models, and it has brought entirely new types of customers into Land Rover who may not have been able to afford its most expensive models. For example, the full-size Range Rover starts at nearly $90,000.

But the Evoque has retained some of the basic characteristics found on higher-end models, such as premium styling inside and out as well as a lot of the off-road capability Land Rover has historically been known for.

“It is such a head-turner,” Lindland said. “It is not going to break the bank, but it is going to give you an incredible bang-for your buck from an emotional standpoint.”

Often vehicles that appeal to buyers on an emotional level are sports cars, but both Land Rover and Jeep have been able to grab buyers’ attention — even those who are not likely to take their cars off-road.

The vehicle has a muscular stance that appeals to male and female buyers alike, and the vehicle is styled in such a way that it can be appropriate in a wide-array of circumstances, whether in the woods or in a more urban environment, auto analysts said.

The new model has essentially the same footprint as the outgoing Evoque, but Land Rover said the vehicle’s new premium transverse architecture makes the cabin on the compact SUV more spacious.

Because it is a Range Rover, the vehicle still has many of the off-road capabilities of its larger stablemates. It can still climb hills, drive through the dirt, and ford rivers. Land Rover’s Terrain Response 2 system will be added to the Evoque for the first time. That feature senses changes in the surface the vehicle is driving on and adjusts terrain settings automatically.

Land Rover is also adding “ClearSight Ground View” feature, which allows the driver to see the ground beneath the vehicle via a screen in the cabin when maneuvering obstacles.

The Evoque may be a small luxury SUV that appeals to many buyers who may only drive it on pavement, but Land Rover has been careful to show it is still serious about making vehicles for off-roading.

“One of the things that Land Rover has done has been a good steward of its brand,” Lindland said. “They haven’t dumbed it down, they haven’t turned it into something it isn’t. They understand they have to have those off-road capabilities, even if they are never used.”