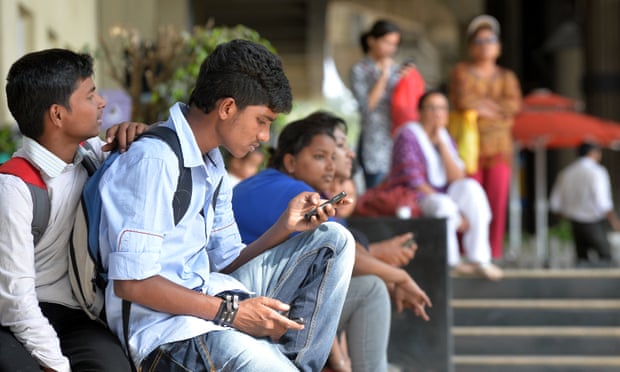 To check Instagram at home, Laveena must stand on the edge of her terrace, arm outstretched, hoping the signal is strong enough for her phone to blink to life.

A few times a day, she grudgingly shares her phone with her little brother, so he can speak to his friends on the WhatsApp account they share.

Like most Indians, the university student from Jaipur, in Rajasthan state, frequently runs out of storage on her phone.

As Laveena explains these challenges, a team from Google is sitting in her living room scribbling notes. To the world’s largest technology companies, the digital habits of a 22-year old Indian woman matter more than ever.

With the mobile market in developed economies nearing saturation point, technology giants such as Google, Facebook and Amazon are turning to large and fast-growing markets in Asia and Africa.

India is especially prized, simultaneously home to the second-largest number of smartphones in the world – more than 330m in circulation – and the world’s largest offline population: more than 1 billion people in 2016, according to the World Bank.

“We think the future of the internet looks like the next billion users,” says Josh Woodward, a product manager at Google, whose team looks at future trends in smartphone use.

“We ask ourselves: if you were designing for Mumbai, not [Google’s headquarters in] Mountain View, what would you build?” he says.

The most recent answer is Neighbourly, the company’s first Indian-inspired social network, and latest attempt to challenge Facebook and WhatsApp in an internet market that by some predictions will exceed 800 million people within three years.

The app, which is being rolled out in select cities across the country, was developed from months of research in Indian train stations, markets and living rooms, from which two main trends emerged.

The first was that most Indians shop, work and socialise within one or two kilometres of where they live. Second was that India’s extraordinary rate of urbanisation – more than 416 million more people will live in cities by 2050, compared with 255 million in China, according to UN projections – is having a dizzying social impact, thrusting millions of people into unfamiliar and fast-transforming neighbourhoods.

“People were saying it was really hard to get trustworthy, safe answers to local questions,” Woodward says.

Neighbourly acts as a virtual bulletin board, with users able to ask others in their area for advice on matters both urgent and banal, from “where is the nearest place I can take someone who is bleeding?”, to “which restaurant serves the best saag paneer?”

The amount of mobile data Indians use has soared at record rates since September 2016, when India’s richest man, Mukesh Ambani, stomped into the country’s telecommunications market with an offer nobody could match: free calls and data for six months, and the cheapest plans on the market after.

With the launch of his company Jio 4G’s sims, Indian mobile phone data became the cheapest in the world. A gigabyte of data now sells for as little as 15 rupees (16p). An independent research firm, TeleGeography, says the average amount of mobile data an Indian consumes has tripled in the past two years to nearly 2.5GB a month.

Like Google, Jio is aiming to win over as many of the next billion users as possible – along with their data. “Data is the new oil, and intelligent data is the new petrol,” said Ambani as he prepared the 4G service for launch.

How technology companies will store and use such a vast reservoir of information is still unclear, says Osama Manzar, whose Digital Empowerment Foundation works to bring the internet to the country’s furthest villages.

“Everybody looks at India as a data goldmine, so the government needs to see how it can protect its people at the policy level,” he says. A national data privacy bill is currently being written.

Google has so far avoided the missteps of Facebook, whose programme to give away a free, limited version of the internet, called Free Basics, was described as “digital colonialism” and found to violate net neutrality.

The company has recently faced criticism over its Indian payment app, the terms of which allowed it to share users’ payment data with other Google products.

“That’s potentially sensitive information and requires a high degree of protection,” says Apar Gupta, a Delhi-based lawyer with experience in privacy cases. “Google has not been clear for what purposes that information will be shared, or how it will be used.”

The proliferation of smartphones and more basic feature phones is altering Indian lives in myriad ways, helping to fuel a horror summer of lynchings based on rumours spread by WhatsApp, but also more prosaic changes.

“From this phone, if I need to go to hospital, I can find the way,” says Bhini, a cleaner in east Delhi, who bought her first 4G phone – on the Jio network – in 2017. Her 11-year old son has epilepsy, and requires occasional, sudden trips to the doctor. Bhini, 30, holds up her handset.

“Whenever I got to hospital, I click a photograph of the report and whatever the doctor has given me.”

As people like Bhini or Laveena form a larger proportion of the world’s smartphone market, more of the world’s digital products will be designed to work on a phone with a four-inch screen, little storage, irregular reception, and which is probably shared between family members.

And that is a good thing for smartphone users elsewhere, Woodward says. “When you design for places like this, with such extreme constraints, it makes the products work better globally.”