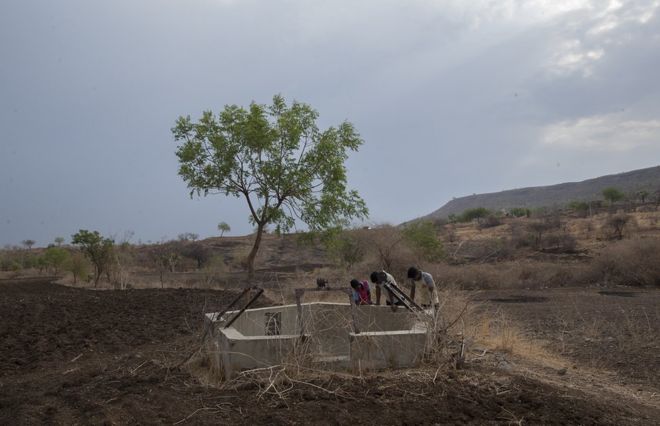 Every morning Dagadu Beldar, 75, wakes up and cooks rice and lentils in his village home in India’s western state of Maharashtra. After that, there’s little else to do.

For the past three years, Mr Beldar has lived alone in his gloomy one-room hut in Hatkarwadi, a stony hillside outback ringed by forests. Drought forced his wife and three sons out of the village. The earth was parched and the wells were dry. There was little water to drink and bathe in, and the family’s millet farm lay barren.

Two sons found work at a sugar factory in Sangli, a cane-growing district some 400km (248 miles) away. Their mother looked after the third son, who went to school there. Hatkarwadi had become a bad memory.

With age, Mr Beldare is going deaf. He mostly keeps to himself in his dark room.

“He’s a very lonely man. He hasn’t seen his family in three years. All because of water,” says Ganesh Sadgar, a neighbour.

Across the lane, 75-year-old Kishan Sadgar’s only son left home a decade ago to work in a sugar factory far away. He lives with his wife and a pet dog. “My son hardly comes home,” he says. “And when he comes he wants to leave after two or three days because there’s no water here.”

A few doors away, Saga Bai lives with her 14-year-old deaf mute daughter, Parvati. Her only son, Appa, left home years ago to work in a factory. “He hardly comes home. He says he will come only if it rains,” says Ms Bai.

And Ganesh Sadgar, the only graduate in the village, is unable to find a bride because “no woman wants to come here because there’s no water”.

Hatkarwadi is located in Beed, a sprawling sun-baked district which has been impoverished by lack of rain. Not long ago, more than 1,200 people lived in its 125 squat homes. More than half of them, mostly men, have left, leaving behind bolted, abandoned homes. These water refugees eke a living in faraway towns and cities, where they have found work in cane farms, sugar factories, construction sites or as taxi drivers.

“There is no water. Why should people stay here?” says Bhimrao Beldar, the 42-year-old headman of the village.

The night before I arrived in the village, there had been a brief burst of rain. Next morning, promising grey clouds seemed to be the harbinger of bountiful rains. By mid-afternoon, however, the sky began burning again, extinguishing any such hopes. That’s how fickle hopes are here. The last time the village had “decent rains” was three years ago.

The cruel summer has sucked the life out of Hatkarwadi. The earth is brown and cracked. Cotton and millet farms have withered away. Only two of the 35 wells have some water left. There are a dozen borewells, but the fast receding water table is forcing farmers to drill deep – up to 650ft – to extract water.

Even a minor gale snaps electricity lines, so the borewells often don’t work.

Water tankers – the lifeline of the drought-hit – refuse to supply because of the precarious state of the narrow strip of tar which serves as the connecting road to the village.

There’s nothing to feed the animals, so 300 buffaloes have been moved to a fodder camp uphill where the animals live with their owners under tarp. Some 75 new toilets built under a federal government programme to end open defecation lie unused because there’s no water. Most villagers borrow drinking and bathing water from well-to-do neighbours who own borewells.

Hatkarwadi is a speck on the map of Beed, where more than a million people have been hit by the drought. Deforestation has reduced forest cover to a bare 2% of the total area of the district. Only 16% of the farms are irrigated. When monsoons are good, the rain-fed farms yield cotton, soya bean, sugarcane, sorghum and millet for 650,000 farmers.

For the last six years, Beed has seen declining rainfall. Irregular rainfall patterns have been playing havoc with crops. A 10-day-pause in rainfall can end up damaging crops. Last year’s abundant rains – 99% of the average yearly rainfall of 690mm – still led to crop failure because there were four long interruptions.

The main Godavari river is running dry. Nearly all of the 140 big and small dams in Beed are out of water, as are the 800-odd wells. Two of the major dams now have what officials call “dead water” – low lying stored water, contaminated with sediments and mud. This is the water which is being pumped into ponds from where nearly a thousand tankers pick up supplies, spike them with chlorine and transport them to 300-odd thirsty villages.

Half of Beed’s 800,000 cattle have been moved to more than 600 cattle camps because of lack of fodder. More than 40,000 people have taken up work under a jobs for work scheme, and officials are opening it up for others to prevent people from going into penury. The drought hasn’t spared people living in towns: the 250,000 residents of Beed town are getting piped water only once a week or sometimes a fortnight.

“This is the worst drought in a decade,” says Astik Kumar Pandey, the senior-most official of Beed. “We are hoping that our drinking water supplies last until end of July and then we have abundant rains”.

The crippling drought in Maharashtra is part of a larger climate catastrophe which has gripped India. More than 40% of the land, by one estimate, is facing drought and more than 500 million people living in at least 10 states are badly affected.

P Sainath, the founder and editor of the online People’s Archive of Rural India, says the lack of water is an “explosive problem”. But drought alone has not contributed to the crisis, he says. It also has to do with the appropriation of water by the well-to-do at the expense of the poor, and the skewed allocation of water.

“The transfer of water from the farms to the industry, from food crops to water guzzling cash crops, from rural to urban areas, and from livelihood to lifestyle purposes for multiple swimming polls in urban high-rises has also led to this situation.”

Back in his office in Beed, Astik Kumar Pandey peers over a live map tracking the movement of GPS-tagged water tankers in the district.

It’s a dense mass of red (stationary tankers picking up supplies) and green (tankers on their way with water) trucks clogging the heart of the district.

“This is how bad the situation is. We are hoping that the rains arrive soon”.

China May Restrict Tech Access in Spiraling US Trade Dispute