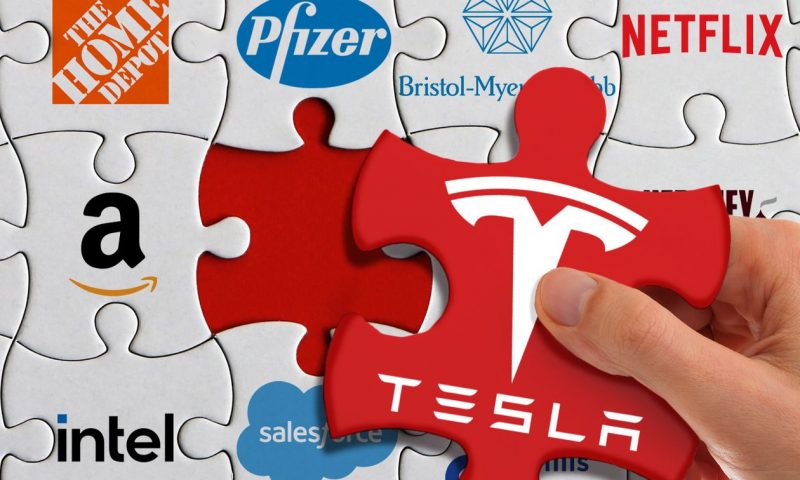 Wall Street will soon find out, as investors strap in for what could be a frenetic ride in equities thanks to electric-vehicle maker Tesla.

On Dec. 18, Tesla’s planned inclusion in the granddaddy of the benchmark U.S. stock indexes is set to create what Howard Silverblatt, senior index analyst for S&P Dow Jones Indices, described to MarketWatch as “the mother of all” stock market rebalancing events. An event that will alter the topography of the S&P 500 at a pivotal time in an already tumultuous period in financial markets.

This Friday though at 5:15 p.m. Eastern is the time when investors will learn which companies will be taken out of the index or have their weightings scaled back to make way for the $572 billion electric automobile pioneer. With CEO Elon Musk owning some 20% of the company’s shares though, the value will be closer to $460 billion.

Part of the trepidation on Wall Street is that Tesla, the largest-ever such company by market value to join the S&P 500, will immediately see a weighting in the 500-company index of between 1.5% and 1.6%.

To put that addition into perspective, every $11 move in the Palo Alto, Calif.-based company would commensurately swing the entire S&P 500 by nearly a point.

“We’ve never put anything that large into the index before,” Silverblatt said.

Last quarter’s S&P 500 rebalancing saw a sizable $32.4 billion change hands, above the average of about $27 billion and under the record $50.8 rebalancing of the third-quarter of 2018.

Next Friday’s rebalancing could see well over $100 billion in trading, with much of that to the sell side, as passive investors and index trackers, which must hold the same securities as the index, and in the same proportion, make room to add Tesla.

There are some $5.3 trillion in funds benchmarked to the S&P 500, including those from behemoths Vanguard, which oversees the Vanguard S&P 500 ETF VOO, -0.05%, and State Street, which looks after the SPDR S&P 500 Trust SPY, -0.03%, commonly referred to on Wall Street as the SPY.

“I think Tesla is a highly liquid stock on a normal trading day, but there will be forced buying occurring as SPY, IVV, VOO and the various S&P 500 index mutual funds add approximately 1.5% of assets into the stock and trim more moderately sized companies to make room, Todd Rosenbluth, head of ETF and mutual fund research at CFRA, told MarketWatch, referencing the ticker symbols of some of the large exchange-traded funds that include Tesla.

“While there are more than a dozen companies added to the S&P 500 index each year they are typically among the smallest companies representing less than 0.1% of the index. Tesla is considerably larger and requires more planning on the part of the asset managers who want to refrain from incurring too much index tracking risk,” the CFRA researcher said.

All totaled, Bartolini estimates that the State Street will have to trade some $6 billion to adjust for Tesla in those funds, with the most of that coming from SPY.

And it isn’t just passive funds that will be compelled to buy Tesla. Goldman Sachs in a research note last month estimated that actively managed funds benchmarked to the S&P 500 will purchase around $8 billion of the company’s shares.

Silverblatt said the fact that Dec. 18 also marks quadruple witching—the simultaneous expiration of stock-index futures and options and individual stock futures and options, a notably volatile time in trading—could actually help relive some market pressure because that session is usually a high-liquidity day which could ease any turbulence surrounding Tesla-related moves. Tesla’s shares will begin trading in the SPX on Dec. 21.

Still, there are questions about what Tesla’s inclusion means over the longer term. Bartolini estimated that Tesla’s inclusion could see the S&P 500’s price-to-earnings ratio, one measure of gauging the value of stock, move by more than 1.6%. Tesla’s P/E over the last 12-months is 1,208 and the S&P500’s trailing 12-month P/E stands at 27.08, FactSet data show.

Complicating matters is the fact that Tesla is also an unusually volatile stock for a S&P 500 member. Its shares have run-up 48% since the S&P Dow Jones Indices announced it was being added to the broad-market index in mid-November. Tesla’s shares have risen a whopping 622% so far this year and are considered one of the most volatile stocks among major companies.

Bartolini notes that by some metrics, Tesla is far more volatile on a daily return basis than companies like Apple or even the SPY itself.

That being said, he does’t expect the volatility of Tesla to increase the S&P 500’s overall volatility.

“Meaning, if a fund just held AAPL, TLSA, and say Wells Fargo—all stocks with volatility over the past year above the market—the volatility of that portfolio would not be the weighted average of the standard deviations. The correlation of returns across those stocks is considered,” the State Street official explained.

The average correlation for an index component since 2015 based on a rolling 100-day correlation to the index has been 0.53, according to Biriyini Associates Inc., in data commissioned by MarketWatch.

Biriyini ‘s director of research, Jeff Rubin, told MarketWatch that Tesla’s correlation based on that measure was 0.39 and has been choppy during that period, with shares tightening their correlation with the S&P 500 during the February-March pandemic-inspired selloff.

Bartolini also raised another point that the inclusion of Tesla will have a significant impact not just on passive investments, but also on active money managers who have thus far relied upon Tesla to achieve so-called alpha, or returns above a benchmark. Now that Tesla will be a part of the S&P 500, it could challenge hedge funds and other investors to figure out different ways of beating the market.

“That game is over now,” the State Street official said. “I do think that is going to be a challenge for highflying growth [funds] to derive alpha,” he said.