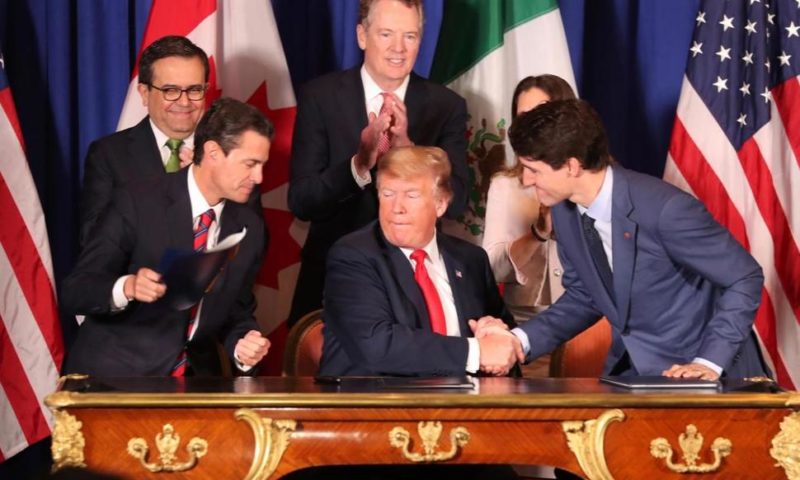 President Donald Trump signed a revised North American trade pact with the leaders of Canada and Mexico, but the deal faces an uncertain future in the U.S. Congress.

BUENOS AIRES, Argentina — President Donald Trump signed a revised North American trade pact with the leaders of Canada and Mexico on Friday, declaring the deal a major victory for workers. But tensions over tariffs, looming GM layoffs and questions about the pact’s prospects in Congress clouded the celebratory moment.

The U.S.-Mexico-Canada Agreement is meant to replace the 24-year-old North American Free Trade Agreement, which Trump has long denigrated as a “disaster.” The leaders signed the new deal on the sidelines of the Group of 20 summit in Buenos Aires after two years of frequently blistering negotiations. Each country’s legislature still must approve.

“This has been a battle, and battles sometimes make great friendships, so it’s really terrific,” Trump said, before lining up next to Canadian Prime Minister Justin Trudeau and outgoing Mexican President Enrique Pena Nieto to sign three copies of the deal — Trump using a black marker for his signature scrawl.

The signing came at the beginning of a packed two days of diplomacy for the American president that will conclude with high-stakes talks Saturday with Chinese President Xi Jinping on ways to ease an escalating trade war between the two countries.

For the new North American trade deal, legislative approval is the next step. That could prove a difficult task in the United States, especially now that Democrats — instead of Trump’s Republicans — will control the House come January. Democrats and their allies in the labor movement are already demanding changes.

Within hours of the signing, Senate Democratic Leader Chuck Schumer said the deal must have stronger labor and environmental protections in order to get majority support in Congress and “must prove to be a net benefit to middle-class families and working people.”

Democratic House Minority Leader Nancy Pelosi — who is seeking to become House speaker in the new year — quipped, “The trade agreement formerly known as Prince — no, I mean, formerly known as NAFTA, is a work in progress.”

Still, Trump projected confidence, saying: “It’s been so well reviewed I don’t expect to have very much of a problem.”

Trump is describing USMCA as a landmark trade agreement. But most companies are just relieved that it largely preserves the status quo established by NAFTA: a regional trade bloc that allows most products to travel between the United States, Canada and Mexico duty free. During the negotiations, Trump repeatedly threatened to pull out, a move that would have disrupted businesses that have built complicated supply chains that straddle the borders of the three countries.

The new agreement does make some changes to the way business is done in North America. It updates the trade pact to reflect the rise of the digital economy since the original NAFTA took effect nearly a quarter century ago. It gives U.S. dairy farmers a bit more access to the protected Canadian market.

The biggest changes target the auto industry. The new deal encourages auto companies to invest or expand in the United States and Canada, not low-wage Mexico, by requiring that 40 percent of a car’s content be made where auto workers earn at least $16 an hour; otherwise, the cars won’t qualify for USMCA’s duty-free treatment.

Trudeau said the deal “lifts the risk of serious economic uncertainty” and said Canada worked hard for a “new, modernized agreement.” But he also used the ceremony to call on Trump to remove steel and aluminum tariffs the U.S. slapped on Canada and Mexico. Trudeau also referenced recent downsizing moves by GM in North America as a “heavy blow.”

Pena Nieto, who will hand off to his successor Saturday, said he was honored to be at the signing on the final day of his administration, calling it the culmination of a long process “that allow us to overcome differences and to conciliate our visions.”

Before Trump arrived in Argentina he injected additional drama into the proceedings by canceling a planned meeting with Russian President Vladimir Putin. Also of interest was whether Trump would have an encounter with Saudi Crown Prince Mohammed bin Salman, who was attending amid global dismay over the murder of Saudi journalist Jamal Khashoggi.

Trump gathered with the leaders for a traditional group photo, but did not appear to acknowledge Putin or the crown prince as he walked by. A senior White House official said Trump and bin Salman exchanged pleasantries during a subsequent leaders’ session. The official spoke on condition of anonymity due to the sensitive nature of the crown prince’s situation.

Trump told reporters later: “We had no discussion. We might, but we had none.”

The president insisted he canceled his meeting with Putin because of Russia’s actions in Ukraine and not because of the federal investigation into Russian interference in his own election.

White House spokeswoman Sarah Huckabee Sanders made the same point: “On the basis of what took place with respect to the ships and the sailors, that was the sole reason.”

Trump announced via Twitter Thursday that he was canceling the planned meeting with Putin over Russia’s seizure of Ukrainian vessels. The abrupt announcement came not long after his former lawyer, Michael Cohen, admitted lying to Congress to cover up that he was negotiating a real estate deal in Moscow on Trump’s behalf during the Republican presidential primary in 2016. The news ensured any meeting with Putin would have put a spotlight on the U.S. special counsel’s investigation into whether the Trump campaign colluded with Moscow during the election. Trump has denied any wrongdoing.

Russia’s foreign minister Sergey Lavrov called the cancellation a missed opportunity, saying in remarks from Buenos Aires that were carried by Russian state television that he doubted “this move would help settling a number of important international problems.” He added: “Love can’t be forced.”

Trump opened Friday with a cordial meeting at the Casa Rosada with Argentine President Mauricio Macri, a longtime business acquaintance. Posing for photos in the gilded Salon Blanco, Trump said they would discuss trade, military purchases and other issues.

The U.S. businessman-turned-politician noted he had worked with Macri’s father on real estate developments and joked that when he and Macri first met they’d never have imagined their future roles on the world stage.

Trump and First Lady Melania Trump concluded the evening with the other leaders at a formal dinner and cultural performance at Teatro Colon.