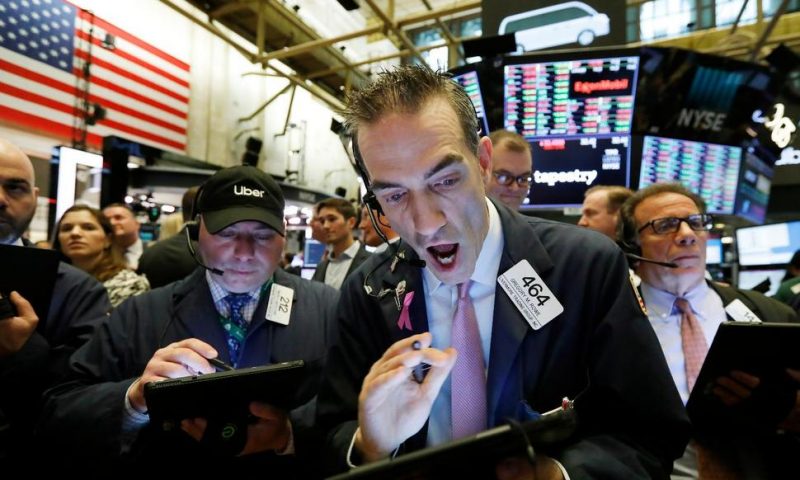 Wall Street capped a turbulent week with a late-day rally Friday after shaking off an early slump triggered by the latest escalation in the trade war between the U.S. and China.

Wall Street capped a turbulent week with a late-day rally Friday after shaking off an early slump triggered by the latest escalation in the trade war between the U.S. and China.

The market fell sharply in the early going after the U.S. raised tariffs on $200 billion worth of Chinese goods when negotiators failed to reach a deal. Hours later, remarks from President Donald Trump and Treasury Secretary Steven Mnuchin gave investors reason for optimism.

The afternoon pickup led to a broad reversal in the market, leaving only health care stocks with a loss. Still, the buying did little to blunt the overall sharp decline for stocks this week. The benchmark S&P 500 index finished with its worst weekly loss of the year, 2.2%.

“Nobody wants to sell too aggressively just in case things get settled and the market rallies,” said J.J. Kinahan, chief market strategist for TD Ameritrade. “As long as they’re still talking there’s a chance that this gets done.”

The higher tariffs from the U.S. and China’s response that it would take “necessary countermeasures” rattled investors Friday who had been hoping for a quick resolution to the dispute. Confidence in that outcome had eased investors’ concerns this year, along with a more patient Federal Reserve and solid economic data. It all added up to help push stocks to their hottest start to a year in decades.

The trade war has stressed consumers and companies with higher costs on goods. The latest tariff increase raises tariffs from 10% to 25% on $200 billion of Chinese imports. Trump has signaled that he might expand penalties to all Chinese goods shipped to the U.S.

The reaction in the stock market this week has been sharp, but even after this week’s tumult, the S&P 500 index remains within 2.2% of its record set on April 30.

That’s because many investors continue to expect the United States and China to come to an agreement eventually, said Anthony Saglimbene, global market strategist at Ameriprise Financial. Neither country would benefit from not getting a deal, he said. In the meantime, the U.S. job market continues to grow, and balance sheets for American households remain better than before the Great Recession.

“We have advised long term investors to look through the noise of the next few weeks and what goes on with trade because the economy is strong and earnings should grow better than expected,” Saglimbene said. “I wouldn’t expect the market would go down 5 or 10% just because we put these tariffs on. I would expect it would decline 5 or 10% if the trade tensions are escalating.”

Things, though, could get dicier not only if the U.S.-China talks break down but also if the trade war intensifies on other fronts. The United States may be nearing a decision on whether to impose tariffs on imports of European automobiles, for example.

The market’s gains this year had been slow but steady up until this week. Prior to this week, the S&P 500 only had four losing weeks this year, most of them minor. Other than that, it’s been mostly up amid a mostly muted year with no major market-moving news. Investors have been cautiously watching corporate earnings, and have been mostly surprised by solid results, though several big companies, including Mylan, TripAdvisor and Wynn Resorts fell sharply after disclosing disappointing earnings or outlooks.

The slump this week has been especially hard on technology stocks, which have far outpaced the rest of the market this year. Those companies do a lot of business in China and would stand to lose greatly if the trade war drags on.

The Nasdaq index, which is heavily weighted with technology stocks, lost 3% for the week after an even stronger run this year than the S&P 500. The weekly drop is only its third this year and the biggest since late December. The Nasdaq is still up 19.3% in 2019.

Uber had an inauspicious debut on the stock market. The giant ride-hailing company’s hotly anticipated stock offering landed with a flop as its shares slid as low as $41.06 in very heavy volume shortly after trading opened. That was well below Uber’s initial offering price of $45 a share. That price was already at the low end of its targeted price range. It closed 7.6% lower at $41.57.

Investors are cautious about Uber after its main rival, Lyft, had a rollercoaster stock market debut on March 29. Lyft initially surged well beyond its IPO price, but then slumped on its first full day of trading. That stock closed Friday at $51.09, down 7.4% on the day and well below its IPO price of $72.

Apple shares are ‘as expensive as ever,’ says Bernstein analyst