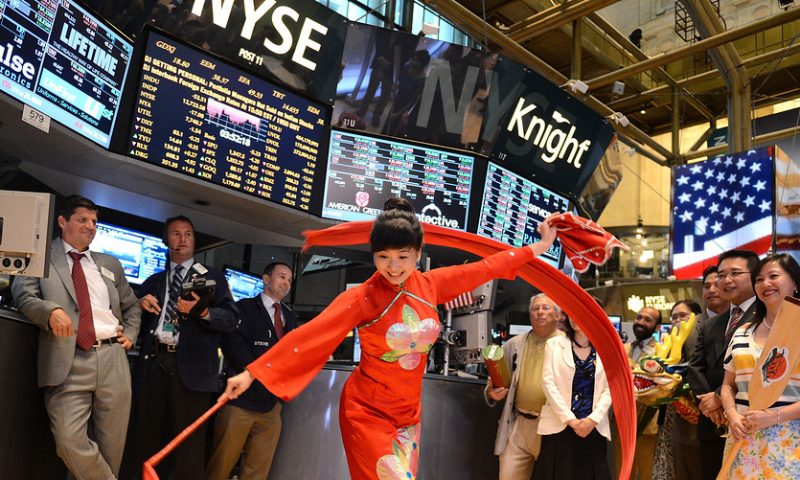 Alarm bells were ringing across financial markets on Wednesday.

Investors are backing away from equities and sending money elsewhere — bonds mostly — as concerns heat up about the global economy and chances of a long and drawn-out trade war.

That’s as Germany delivered a dire jobless report and China may have upped the trade-war ante with a vague threat on rare earth materials — needed for all the gadgets we can’t live without. (See chart of the day for more).

If investors aren’t worried, they should be, says our call of the day from Nordea Asset Management’s senior macro strategist, Sebastien Galy. He’s particularly worried that few consider trade talks could collapse ahead of a late June G20 meeting, where President Donald Trump and Chinese President Xi Jinping are expected to show up.

“The market is deeply underestimating how bad it can get,” Galy told MarketWatch in a phone interview. He sees a “60% chance that things go quite awry on the trade side,” and a 5% to 10% pullback for stocks “quite likely though eventually temporary” as a result of that.

He explains how that trade situation could go pear-shaped: “The worst-case scenario is that just ahead of the G-20, we realize that it’s a no-deal situation, and we get the U.S. imposing much wider tariffs on China, which will retaliate and devalue its currency. That will force the Americans to again increase tariffs.”

The biggest pain will be felt on companies such as sports retailer NikeNKE, -2.87% iPhone maker Apple AAPL, -0.48%  or pharmaceutical companies, all who earn a chunk of revenue overseas, says Galy. If China devalues the yuan, their revenue earned in that country would take a hit when converted back into dollars.

The good news is that the U.S. economy, which is now mostly services-driven, is in decent shape, said Galy, which could shield it from some of the effects of a China slowdown and tit-for-tat tariffs. He added that investors can probably count on an interest-rate cut from the Fed, whose big concern is persistently low inflation.

But even if stocks are headed for a pullback in the next few weeks, Galy said they would probably bounce back. He’s waiting to snap up growth stocks—companies that tend to offer higher growth, but also higher risk, such as some tech and biotech firms.

“When you reach the bottom growth stocks are the ones to buy, they should be the ones that have suffered the most,” he said.

Investors don’t like equities, but they love bonds right now. The yield on the 10-year bond TMUBMUSD10Y, +0.23%  is hovering at the lowest since September 2017, and is lower than the yield on the three-month U.S. Treasury noteTMUBMUSD03M, -0.33% That’s referred to as a yield-curve inversion — when long-term bonds pay lower rates than short-term ones — and has historically signaled a recession. Read more here.

Europe stocks SXXP, -1.43% are also deep in negative territory, weighed in part by a sharp jump in German unemployment for May. Asian equities finished mostly lower, with the Nikkei NIK, -0.42%  down 1.2% and China stocks SHCOMP, -0.70%  up fractionally.

Those companies have been running hot for much of May. The fresh action comes after China, the dominant producer of rare earth minerals, reportedly made a veiled threat to cut off U.S. supply in the ongoing trade tussle.

“Given that the materials are used in everything from iPhones to missile guidance systems to electric cars, and that China’s mines account for around 70% of the globe’s output, the country may have found its not-so-secret weapon in the trade war,” Connor Campbell, financial analyst at Spreadex, told clients.

Speaking of trade tensions, China tech giant Huawei filed a motion in U.S. court challenging the constitutionality of a law that allows the U.S. to limit sales of its products. Meanwhile, the Trump administration has decided not to label any country, including China, a currency manipulator. And the European Central Bank warned in a report Wednesday that sluggish growth and growing trade tensions could trigger “bouts of high volatility” across markets.