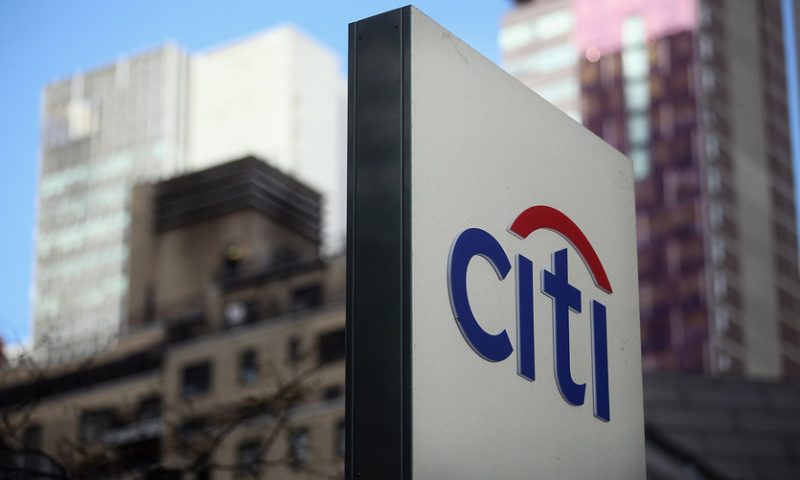 U.S. stocks closed lower Monday, though not far off records for indexes, as results from Goldman and Citigroup failed to thrill investors, who are looking to an early slate of earnings from banks to get a sense of the health of the broader economy.

Goldman Sachs Group Inc. GS, -3.82%  and Citigroup Inc. C, -0.06% reported quarterly results as earnings season gets under way, though the week will be shortened by the Easter holiday.

Both banks showed sharp declines in earnings, compared with the first-quarter of last year, but were able to surpass analysts’ low expectations for quarterly profits. On the revenue front, Goldman fell short of estimates while Citigroup matched, underscoring muted trading and mergers-and-acquisition activity on Wall Street in the first quarter. Blue-chip Goldman shares were down 2.3% Monday, weighing heavily on the Dow, while Citi shares rose 0.1%

Analysts expect first-quarter earnings numbers for the S&P 500 to suffer the first year-over-year decline in nearly three years as macroeconomic headwinds continue to pull down estimates from analysts.

U.S. Treasury Secretary Steven Mnuchin told reporters over the weekend that the U.S. and China were moving closer to an agreement on trade, with phone discussions between the two countries last week. But he wasn’t sure if more face-to-face meetings would be needed. On Sunday, Reuters reported that the U.S. was watering down demands that China cut down on industrial subsidies as a condition for a deal after encountering strong Chinese opposition.

President Donald Trump renewed his attacks on the central bank Sunday. He criticized rate increases enacted during the first two years of his administration as well as the bank’s balance-sheet reduction program, known as qualitative tightening, which is set to end in September.

Federal Reserve Chairman Jerome Powell has repeatedly asserted the central bank’s independence from political influence, while pledging to serve out his four-year term, ending in early 2021.

Chicago Fed President Charles Evans told CNBC on Monday morning that “I can see the funds rate being flat and unchanged into the fall of 2020. For me, that is to help support the inflation outlook and make sure it’s sustainable.”

Factory production in New York state picked up in April versus March, with the Empire State business conditions index rising from a reading of 10.1 from the previous months’ two-year low of 3.7.

“The alpha to begin earnings season bodes well for active managers including hedge funds. The stocks of banks with good earnings are going up and with poor earnings are going down,” said Ian Winer, an advisory board member of Drexel Hamilton.

“Despite an ambitious strategy to diversify the bank’s revenue streams from its core investment banking activities — such as the launch of Marcus, its online banking service — Goldman’s revenue structure remains quite static, with trading activities still accounting for 41% of the bank’s revenue, while investment management, with strategic growth opportunities, only accounts for 17%, mirroring last year’s results,” said Axel Pierron, managing director of capital markets management consulting firm Opimas, in an email.

Shares of Walt Disney Co. DIS, +1.52%  rose 1.5% after Richard Greenfield, an analyst at BTIG and a longtime skeptic, upgraded the stock to neutral from sell.

Shares of Canadian legal cannabis maker Aphria Inc. APHA, -14.24% slumped 15% after the Canada-based cannabis company swung to a wide third-quarter loss in the most recent quarter.

Which markets are closed on Good Friday