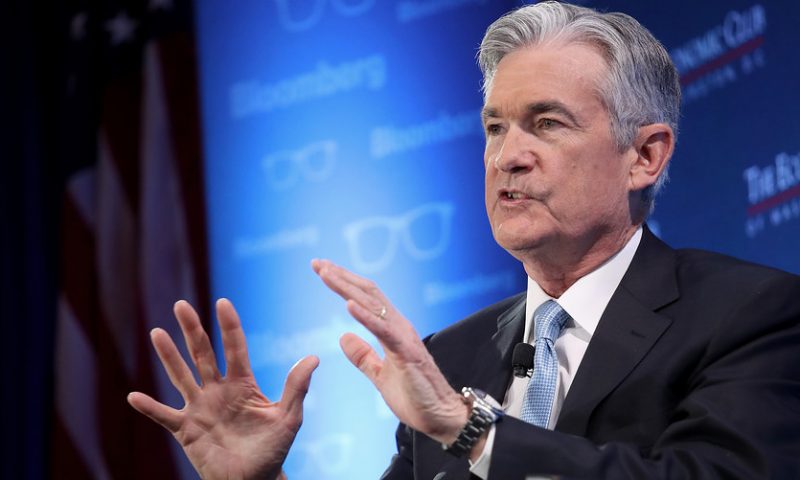 U.S. stocks closed higher Wednesday after the Federal Reserve kept interest rates unchanged as widely expected but dropped the reference to “patient” in its statement to indicate it is ready to make ease monetary policy if needed.

The Fed said it will “closely monitor” the economy given increasing uncertainty about government policy though it signaled it may not need to lower rates before 2020. The central bank remained mostly optimistic about the economic outlook, but said inflationary pressures have receded, compelling it to lower its forecast for PCE inflation in 2019 to 1.5% from 1.8%, below its 2% target. At the same time, it left its gross domestic product estimate at 2.1%. Meanwhile, the Federal Open Market Committee’s “dot plot” of likely federal funds rate changes shows one rate cut next year and one hike in 2021 but there was a wide range of forecasts around that median.

“The FOMC will closely monitor the implications of incoming information for the economic outlook and will act as appropriate to sustain the expansion,” the Fed said in a statement, removing its recent reference to being “patient.”

Chairman Jerome Powell also reinforced the generally dovish message by stating that the Fed is committed to supporting the economic expansion, indicating that the bank is prepared to cut interest rates if necessary.

The decision comes as the White House has been pressuring the independent central bank to ease policy. Trump, who has been a constant critic of the Fed, on Tuesday said “let’s see what he does” in response to a question about a report indicating that the White House sought to somehow demote the Fed chairman that Trump himself appointed. Trump has repeatedly called on Powell to cut the central bank’s federal-funds rate.

“My initial thoughts are that the Fed did what the market thought they would do today, and offered to give them what they really want in the near future. That could be as early as July, and that could be as much as 50 basis points,” said Kevin Giddis, head of fixed-income capital markets at Raymond James.

“The long journey for the Fed to catch up [to] where the market has always been is over. They finally realize that they are not going to see inflation, can’t move it higher with their words, and must finally face the music that they mistakenly assumed that traditional policy moves would work in today’s economy,” he said.

“I view it as an incrementally more dovish posture today than before,” said Mike Loewengart, vice president of investment strategy at E-Trade Financial. “Investors would be well served to recognize that a rate cut is not a foregone conclusion, especially given the Fed has limited ammunition in its traditional tools of monetary policy, most notably the federal-funds rates.”

Harley-Davison Inc.’s stock HOG, -0.20% slid 0.2% higher after the motorbike maker said it was teaming up with a manufacturer in China to make its smallest bike in decades.

TripAdvisor Inc. shares TRIP, +1.90% were up 1.9% after SunTrust Robinson Humphrey analyst Naved Khan upgraded the stock to buy from hold.

U.S. Steel Corp. shares X, +4.05% climbed 4.1% after the company said it would cut production by idling two blast furnaces in response to falling demand for steel from a weakening manufacturing sector related to trade clashes.

Shares of Southwest Airlines Co. LUV, -0.37% slid 0.4% after the air carrier raised its second-quarter unit revenue guidance while extending the length of time it expects its 737 Max 8 aircraft will be grounded.

How were other assets trading?

The U.S. dollar retreated, with the ICE U.S. Dollar index DXY, -0.21% falling 0.4%. Reports that the White House could impose sanctions on Turkey to punish the country from purchasing a missile-defense system from Russia has sent the liraUSDTRY, -0.0829%  sliding against the U.S. dollar.

This would be the worst-case scenario for health companies, according to UBS