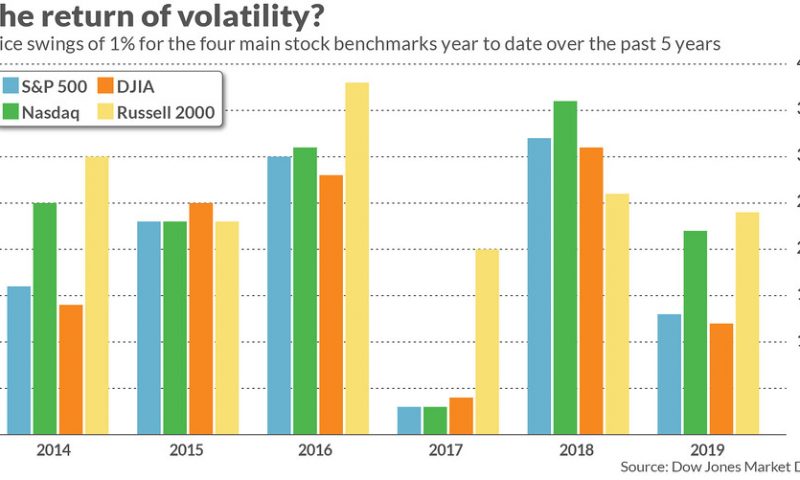 However, on a comparative basis, moves for the main equity benchmarks, which had been carving out fresh records as recently as Friday, are still running behind the pace of price swings over the past five years, with the exception of 2017’s history-making period of quietude, according to Dow Jones Market Data.

It is a similar trend for the Nasdaq, with 22 price moves of 1% so far this year, and 12 for the Dow (see the chart attached to this article).

For swings of 2% or greater, the Dow and S&P 500 have each only had two moves of 2% — barring 2017 — that marks the fewest for both, year to date, since 2015. The Nasdaq has had five moves of 2%, three up and two down, so far this year, representing its fewest total swings of that magnitude also since 2015. That’s outside of 2017 when there were none to this point for the technology-laden index.

To be sure, the confidence-testing swings in May are notable given the relative period of calm that 2019 had enjoyed after a tumultuous end to last year, which represented the worst losses for the stock market in a decade.

The Cboe Volatility Index VIX, +0.41% a measure of stock market turbulence known as the VIX and sometimes Wall Street’s ‘fear gauge’, surged 34% on Tuesday to above the gauge’s historical average at 19. That represents the loftiest level for the index, which tends to rise as stocks fall, since late January.

“This recent pick-up in volatility was long overdue given the streak of extraordinarily low volatility we’ve had recently,” Salil Mehta, a statistician and former leader a former director of analytics for the Treasury Department’s $700 billion TARP program, told MarketWatch.

However, the number of swings that the market has experienced thus far suggests, perhaps, that investors shouldn’t be that alarmed—yet.

Though recent market bumps could imply that a bumpy road may be in store, as investors weigh the prospect of the U.S. increasing tariffs on China imports to 25% from 10% on Friday, dialing up the animus between the world’s biggest economic superpowers.

So far, market participants are selling, given that progress on trade talks had been a key feature of markets rebounding over the past four months after last year’s rout.

The Wall Street Journal reported that a situation known as backwardation in the VIX, where futures contracts are higher than those further out in the future, say, those for June and July. That condition is unusual because investors tend to know less about the future and would, therefore, pay a higher price for the protection against stock declines, which is what VIX contracts can represent.

Mehta said investors certainly should expected more market swings: “While the VIX shot up quickly (from 12% to 19% based on just a -2% drop in the S&P), we should expect much more volatility in the ordinary course of the year, leaving any current news headlines aside,” he told MarketWatch.

Frank Cappelleri, executive director and equities trader at Instinet, in a Wednesday research note that there have been previous episodes where the VIX jumped last year but didn’t immediately result in a market meltdown (see chart below tracking VIX and VVIX, the index that tracks the volatility of volatility):

“What’s the phrase again? It’s about the follow through. That’s true for the stock market…and prospective trade deals,” he wrote.

Follow through on a rebound was what the markets were attempting early Wednesday, with the Dow up 0.4% and the S&P 500 and the Nasdaq gaining 0.3% in afternoon action.