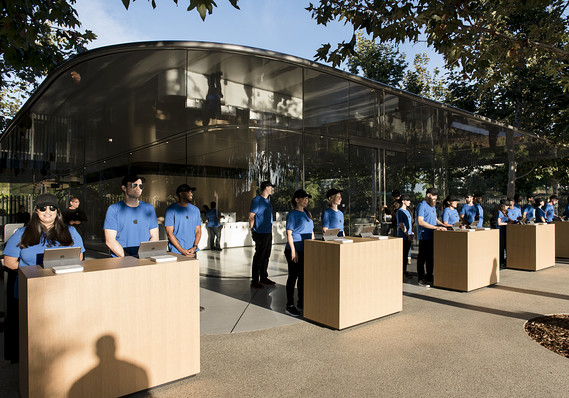 U.S. stocks closed mostly higher on Wednesday, with the S&P 500 and the Dow bouncing back from lows. However, the Nasdaq’s effort to build on its recent gains hit a wall as shares of chip makers sunk and the unveiling of Apple Inc.’s new product lineup didn’t result in share pop for the world’s most-valued company.

The S&P 500 and the Nasdaq have risen for two straight sessions through Tuesday following a four-day skid. Recent trading has been muted and the S&P hasn’t closed with a move of 0.5% in either direction in any session thus far this month.

What drove the market?
Apple rolled out iPhone XS and XS Max with extended battery life as well as a special model equipped dual-Sim cards just for China, suggesting that the tech company is doing as much as it can to remain competitive in one of the most coveted markets in the world. However, the news did little to revive Apple AAPL, -0.03% shares which slid 1.2%.

On the trade front, the U.S. has reached out to China for follow-up talks after negotiations last month concluded without results, The Wall Street Journal reported Wednesday. The move is viewed as an effort to give Beijing another opportunity to resolve outstanding trade issues before the Trump administration slaps more tariffs on Chinese imports, the Journal said.

Trade tensions between the U.S. and its partners have put pressure on global markets in recent months, but American equities have continued to get a boost from encouraging economic reports and companies’ upbeat quarterly reports.

Investors this week have been tracking the fight between the U.S. and China in particular, as analysts warn that a full-blown trade war would hurt economic growth.

In the latest economic data, the wholesale cost of U.S. goods and services fell in August for the first time in a year and a half as the recent upturn in inflation appeared to ease.

The U.S. economy grew at a “moderate pace” even though there were pockets of weaker activity in certain districts, according to the latest Beige Book released. Trade concerns and a lack of workers are also delaying projects, the report said.

What were strategists saying?
“There’s not any great big news to trade on, so it’s likely we’ll primarily be moving on headlines, which means we can be up one hour and then moving down the next,” said J.J. Kinahan, chief market strategist at TD Ameritrade.

Referring to some recent weakness, Kinahan said, “you have to separate a natural selloff from one driven by a real change in the market. It makes sense that we could see some selling after a remarkable year and a half, especially in areas like tech that have done well. But I don’t see a tone change in the market; the numbers continue to point to a strong economy.”

Tech stocks are burdened by high valuations and any “misstep” could trigger large declines, said Eric Aanes, president of Titus Wealth Management. Aanes believes there could easily be a 5% to 10% swings in large tech stocks on any news that may be perceived as less than positive.

Vital Therapies Inc. VTL, -92.86% plummeted 93% after it said it is halting the development of a system aimed at treating liver failure after a disappointing trial.

Nielsen Holdings PLC NLSN, +1.29% rose 1.3% after the TV-ratings company said it expanded its previously announced strategic review to assess a potential sale of the company.

Wabco Holdings Inc. WBC, -5.85% said it expects its 2018 earnings to be in the lower half of a previously given outlook range, citing trade tensions. The stock sank 5.9%.

Bausch Health Cos. Inc. BHC, +13.88% jumped 14% after it reached an agreement in a patent dispute over a treatment for irritable bowel syndrome.

What were other markets doing?
Asian closed mostly weaker except India while European stocks SXXP, +0.24% were generally higher. The U.S. Dollar Index DXY, +0.10% which gauges the buck against a basket of six other currencies, is off 0.4%.

Crude-oil prices settled higher as Hurricane Florence barreled toward the East Coast, boosting demand and raising worries about disruptions to gasoline flows and pipelines in the region.