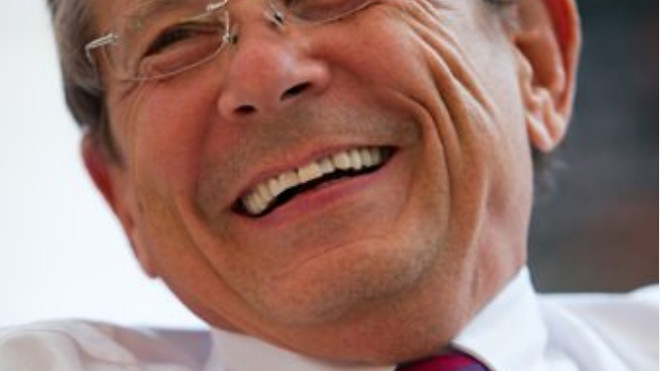 Williams, age 77, is focused on seasonal patterns that consistently play out over time

Attention, investors: Spooky times are on the way for the stock market.

You should trust your instincts if you’re nervous because of the wobbly action in the S&P 500 Index US:SPX, Nasdaq US:COMP and the Dow Jones Industrial Average US:DJIA since these indices got slammed in early September.

Starting right about now, the stock market will see a significant and sustained selloff through about Oct. 10. Don’t look to gold as a hedge. It’s riding for a fall, too, despite the widespread misbelief that it protects you against losses in weak stock markets.

The bottom line: Ghosts and goblins come out in the market in the runup to Halloween, and we can expect the same this year.

That’s the view of trader Larry Williams, who offers weekly market insights at his website, I Really Trade. Why should you listen to Williams?

I’ve watched Williams accurately call many market twists and turns in the 15 years I’ve known him. I know of more than a few money managers who trust his judgement. Williams, 77, has won or placed well in the World Cup Trading Championship several times since the 1980s, and so have students and family members who apply his lessons.

He’s popular on the traders’ speaking circuit both in the U.S. and abroad. And Williams is regularly featured on Jim Cramer’s “Mad Money” show.

To make market calls, Williams uses his own time-tested mix of fundamentals, seasonal trends, technical signals and intelligence gleaned from the Commitment of Traders report from the Commodity Futures Trading Commission (CFTC). Here’s how he thinks about the three types of positions the CFTC reports. Williams considers positioning by commercial traders or hedgers and users and producers of commodities to be the smart money. He thinks large traders, mainly big investment shops, and the public are contrarian indicators.

Williams mainly trades futures because he thinks that’s where you can make the big money. But we can apply his calls to stocks and exchange traded funds, too. Here’s how he’s positioning for the next few weeks and through the end of the year, in some of the major asset classes and stocks.

To make market calls in September, Williams turns to what he calls the Machu Picchu trade, because he discovered this signal while traveling to the ancient Inca ruins with his wife in 2014. Williams, who is intensely focused on seasonal patterns that consistently play out over time, noticed that it’s usually a great idea to sell stocks — using indexes, mostly — on the seventh trading day before the end of September. (This year, that’s Sept. 22.) Selling on this day has netted profits in short-term trades 100% of the time over the past 22 years.

Williams also notes that selling on the 11th through the 20th trading day of September has been the right thing to do 80%-95% of the time, with one exception. Sales on the 17th trading day net gains 75% of the time — still not bad.

This year, that means the time for selling is Sept. 15-28. The percentage success rates cited above are for very short-term multi-day trades. But stocks tend to peak for the month in this time range, and then stay weak through around the middle of October. He thinks the pattern will repeat again this year.

“We’re most likely going to have a pullback in the market here,” says Williams.

One caveat: Watch the advance-decline line, one of Williams’ favorite indicators. If fewer stocks are declining relative to advancers on days the stock market is weak, or if there is a broadening out of participation on up days, this is a sign the any selloff may be coming to a close.

“If great breadth comes in to the market [on up days], then I will get bullish,” he says.

A lot of people think gold serves as a hedge during stock market declines, but this isn’t true, says Williams. Gold has slumped along with stocks in most of the major market selloffs. He expects the same over the next three to four weeks. He’s advising gold traders to sell any rallies now, and then revisit when gold falls later this year to buy back lower.

To make this call, Williams looks at the typical seasonal pattern for gold that plays out every year, and also the historical trends in election years. The conclusion: Gold typically peaks around the middle of September then weakens for most of the rest of the year. This year, gold has underperformed its typical seasonal pattern, which is bearish for the metal.

“Gold has not been able to stay in step with what happened in the past, therefore the seasonal pattern should work this year,” he says.

Another sign of potential weakness is the “crazy bullishness on gold” among the right-wing pundits like Ron Paul who have a long-standing affinity for the medal.

“They’re all on the bandwagon because of the rally in gold,” he says.

As with gold, he expects a similar seasonal pattern in other precious metals and copper. They will be weak from now through the end of the year, with a possible bounce in the middle of October.

Gold and the dollar have such a strong inverse relationship, if you are long gold, you are basically short the U.S. Dollar Index US:DXY. That’s not a good place to be, with gold about to fall. Better to be long the dollar now.

He bases this call on where the dollar is in a 60- to 70-day cycle that tends to play out over time. It’s now coming off the recent lows in early September. He also cites readings from the Commitment of Traders Report showing that “smart money” commercial buyers are getting long the dollar, which is unusual.

“There’s a pretty good rally coming in the dollar,” he says.

Here are some stock patterns that should play out over the next several months, according to Williams’ system.

• Amazon.com US:AMZN tends to decline now through mid-October and even through to Christmas, but then it returns to rally mode. Williams expects the same thing this year. This is a “high conviction” call, he says.

• It makes sense to buy retail names just before Thanksgiving for the typical rally that plays out for a few weeks heading into the holiday shopping season. Names to consider at that point include: Walmart US:WMT, Target US:TGT, Home Depot US:HD and Costco Wholesale US:COST.

• Sell jewelry stocks such as Tiffany US:TIF and Signet Jewelers US:SIG in the middle of December because they tend to go down in January for a month or so.

• International Business Machines US:IBM tends to rally from late October, suggesting the stock will be a good trading buy in that time frame.

• Buy natural gas because Williams expects it to rally. If he’s right, this would be good for natural gas-related stocks I’ve recently suggested in my stock letter, Brush Up on Stocks, or Continental Resources US:CLR and Comstock Resources US:CRK. Continental Resources founder Harold Hamm has been a big buyer of his stock. Comstock is implicitly backed by Dallas Cowboys owner and energy investing expert Jerry Jones, who owns a majority stake in this name.

Michael Brush is a columnist for MarketWatch. At the time of publication, he owned CLR and CRK. Brush has suggested AMZN, IBM, WMT, TGT, HD, TIF, CLR and CRK in his stock newsletter, Brush Up on Stocks. Follow him on Twitter @mbrushstocks.