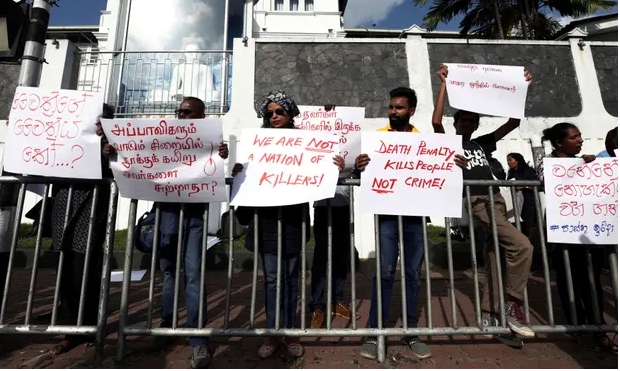 Sri Lanka has hired two executioners as it prepares to put four prisoners convicted of drug offences to death in what would be its first use of capital punishment for more than 40 years.

The executioners were picked from among 100 applicants who responded to an advertisement calling for male Sri Lankans aged between 18 and 45 with “excellent moral character” and “mental strength”.

The prisons department began the recruitment process in March after the last executioner quit in 2014, citing stress after seeing the gallows for the first time. Another, hired last year, never turned up for work.

President Maithripala Sirisena announced on Wednesday an end to a moratorium on the death penalty in force since 1976, a move political analysts said was meant to boost his chances of re-election if he stands again later this year.

Local and international rights groups, as well as the former colonial ruler Britain, Canada, the EU and UN have raised concerns about the south Asian nation’s restoration of capital punishment.

“The recruitment process is finalised and two [executioners] have been selected. The two need to go through final training which will take about two weeks,” prisons spokesman Thushara Upuldeniya said.

The prisons commissioner, TMJW Thennakoon, declined to provide details of the four convicts whose death penalties the president approved.

On Friday, a Sri Lankan journalist filed public interest litigation seeking to stop any executions, arguing that people’s rights were being violated. A court hearing will be held on 2 July, and Thennakoon pledged there would be no executions for the next seven days.

A spokesman for the UN office on drugs and crime said on Thursday international drug control conventions could not be used to justify the use of the death penalty for drug-related offences alone.

“Application of the death penalty may also impede international cooperation in fighting drug trafficking as there are national laws that [bar] the exchange of information and extradition with countries which may impose capital punishment for the offences concerned,” the spokesman said.