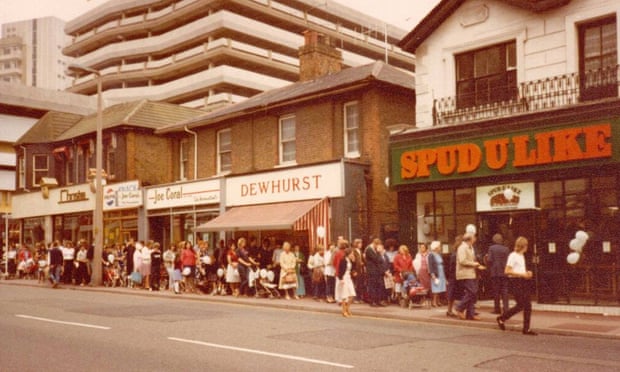 The baked potato specialist Spudulike has closed all 37 of its branches with the loss of nearly 300 jobs, the latest in a growing list of once-familiar retail names to disappear from the high street.

Founded in 1974, the chain was popular in the 1980s and 1990s and became synonymous with the Harry Enfield and Kathy Burke creations Wayne and Waynetta Slob, who named their second child Spudulika.

The late Victoria Wood famously questioned whether the correct pronunciation for the chain was “spu-doo-lickay”.

The business has collapsed after failing to secure backing from landlords for a rescue restructure. It joins other well-known names in the retail graveyard, including Poundworld, BHS, Maplin, Woolworths, Athena and Blockbuster, all of which have gone out of business in recent years.

Spudulike has branches across the UK, from Dundee in Scotland to Plymouth in Devon and London’s Oxford Street. Staff have been made redundant without back pay or holiday pay after Neil Bennett and Alex Cadwallader of Leonard Curtis were appointed as administrators of the parent company, T&G Fast Food Developments, late last week.

One member of staff told the Guardian: “The branch I worked in was given zero notice of this action; in fact, staff arrived at the store [on Friday] none the wiser.”

Workers were owed two weeks’ pay, with some employees owed more than £500 in back pay, according to one staff member.

Another said he and a manager had already started work for the day when they received an email telling them to stop prepping food.

He said: “I got home later that day still in shock over what had happened and when I finally went to bed, broke down into tears at the realisation I may not even be able to pay my rent this month.”

The company, which also trades as Fat Jackets, last month tried to restructure via an insolvency process known as a company voluntary arrangement (CVA). This process has previously been used to shed unprofitable branches by a string of retail and restaurant groups, including Debenhams, Topshop’s owner, Arcadia Group, Mothercare and Carluccio’s.

Landlords said they were shocked at the scale of rent cuts being demanded by Spudulike because they were much more severe than other companies had sought.

Administrators were called in after the CVA failed and a subsequent attempt to find a buyer was also unsuccessful.

A letter sent to staff said Spudulike had been “under financial pressure” in recent years and a number of alternative options to save the business, including seeking a buyer, had also failed. It said administrators were still continuing attempts to find a buyer for at least part of the business and staff could be contacted in future about re-employment.

When Trump turns up the heat on trade, Americans will feel it too