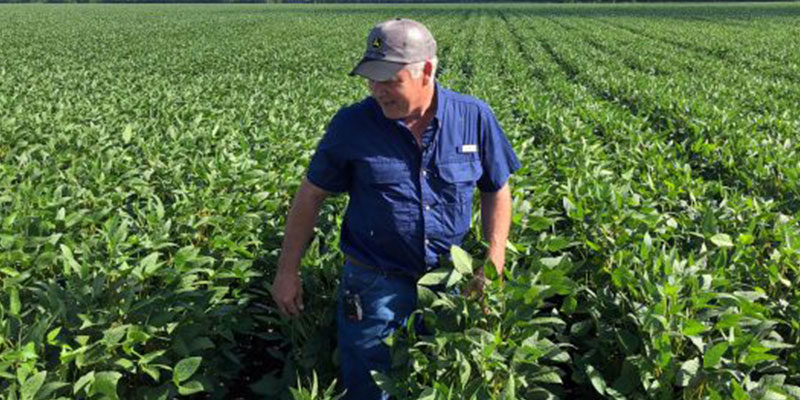 Delegations from China, India, Italy and Spain that were supposed to meet with North Dakota’s bean, pea and lentil growers in September have canceled their visits because of trade tensions.

The moves come at a crucial time for American farmers, who use these annual visits to fill orders right after the harvest and make new business connections.

A bumper crop has weighed on soybean prices this year, and trade tariffs already have added pressure on prices of other crops. Growers haven’t seen prices this low for their dry peas and lentils since 2006 and for their chickpeas since 2003, according to Tim McGreevy, CEO of the USA Dry Pea & Lentil Council.

Soybean futures are down 16 percent since April. And growers have seen a 25 percent decline in dry pea prices, a 40 percent fall in lentil prices and a 49 percent drop in chickpea prices.

Soybean farmers and processors in North Dakota were expecting 16 trade delegates from China to visit from Sept. 17 to 20, and hoped for big orders to come out of the meetings. But a week ago, they heard the visit was canceled.

“They indicated it was not the right political time to visit,” said Simon Wilson, executive director for the North Dakota Trade Office, who tried to salvage the meetings unsuccessfully.

Some of the delegates who were supposed to come represented new buyers and were each expected to make purchase orders of up to 200 metric tons. “That’s a substantial amount,” Wilson said. “These delegations are not social visits. They are coming here to buy. It’s about building relationships and making the deal.”

Wilson also told CNBC that a trade mission from Spain and Italy recently canceled its planned visit in September to see pea and lentil crops as well as to make purchases. The delegates seemed concerned that their business at home would be affected by visiting the U.S., Wilson said.

“They explained to us that there is too much uncertainty,”” he said. “I took this as they could see a local business impact if seen as supporting the U.S. protectionist policy by coming to the U.S. and buying the product.”

Agriculture officials were already scrambling to find new buyers for the crops after India slapped tariffs on American exports, and the canceled trips complicate those efforts. India buys between 150,000 and 240,000 metric tons of U.S. dry peas each year, nearly 30 percent of total U.S. exports. In the last five years, India bought 60,000 to 120,000 metric tons of lentils a year, representing 23 percent of total U.S. lentil exports.

“We were working hard with our producers to help replace the Indian market, which has been shut down to us because of Indian tariffs,” Wilson said. “It is a mess.”

The September mission to soybean growers was supposed to be in response to a visit U.S. producers and trade officials made in April to meet the Bean Product Committee China (BPCC). American members of that group included the U.S. Soybean Export Council (USEC) and the Foreign Ag Service (FAS).

Nancy Johnson, executive director of the North Dakota Soybean Growers Association told CNBC, “When trade delegations get canceled they stay canceled because the planning is complex. When that happens it impacts our ability for relationship building.”

The biggest fear, McGreevy said, is that competitors will use the opportunity to aggressively vie for China’s business. “Canada has a larger pea crop than ours, Australia is looking to increase their sales and Russia and Ukraine are ramping up their pea production to sell to China,” he said.

With a large crop of soybeans coming and no end in sight to these trade issues, Wilson tells CNBC the problem facing the farmers and those involved in shipping the crop is just beginning. Soon enough, farmers will begin having problems finding storage for the unsold crops.

“We are going to have a massive storage challenge as well as a cash crunch,” he said. “If it doesn’t get resolved soon there will also be the winter transportation issues of trying to move large amounts during the more difficult winter months unless this drags on into the spring.”

The lack of exports eventually will force the usual train and shipping routes to change, as freight companies shift their business elsewhere.

North Dakota’s soybeans that are exported are sent to the Pacific Northwest to be shipped to China. A lack of orders means “there are no ships or trains waiting,” Johnson said. “Typically we get orders placed in June, July, and August. The flow of this trade chain has stopped.”

In a recent report, Peter Sand, chief shipping analyst at Bimco, described the trade war as a “speeding train, accelerating with every trade-restrictive retaliatory measure imposed and becoming ever more difficult to stop.” He added that the trade war “distorts the free flow of goods, changes trade lanes and makes it difficult for ship operators and owners to position ships efficiently in the market.”

Paul Bingham, transportation economist and director of the maritime trade advisory firm Hackett Associates, told CNBC that the fears of the North Dakota agriculture sector are very real. “Bulk shippers operate on an individual vessel basis, which makes them dependent on vessel owners making capacity available,” he said. “Bulk vessel owners operate globally, positioning their vessels to routes where they expect to have customers.”

With weaker U.S. export shipping activity, these bulk vessel owners are shifting to routes with more cargo, he added. “So, if they are looking at U.S. export levels dropping further, they do not want to have their vessels in that area. With Brazil, China trade route flowing, these vessels are at a great distance to quickly get to the Pacific Northwest if market conditions changed.”

If tensions escalate, “retaliation pushes the economy closer towards recession and it will get harder for the United States to pull itself out,” Bingham said.

The trade fears eased somewhat last week after China said it would hold a fresh round of trade talks in Washington later this month, but the damage may already be done to this year’s crop exports.

“Even with these potential talks the one thing we need to separate is there is a very big difference between tariffs and trade,” explained Johnson. “Unlike a tariff that could be turned on and off like a faucet, the trade chain is not. It takes time to get trains and ships. That’s the thing we really forget.”

What stocks should you buy with the market at a record high?