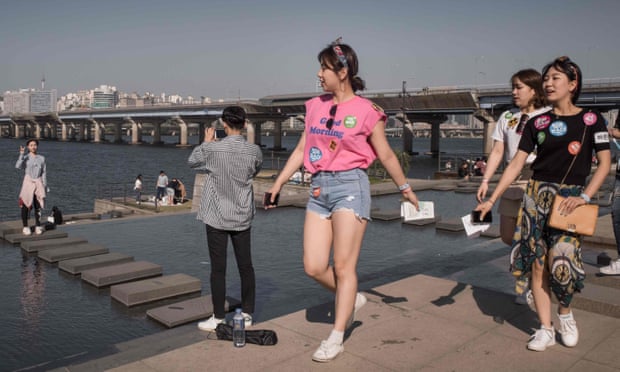 Kim Soo-jin will never forget the disgusting taste of the pulpy green-brown traditional Korean brew she drank in the hopes of ending her pregnancy, or the night she spent in pain, curled into a ball and unable to move.

The recipe her roommate found on the internet was an attempt to sidestep South Korea’s 65-year ban on abortions, but in the end it did not work and Kim, a 21-year-old student at the time, was forced to go to a clinic a week later for an illegal surgical procedure.

“Deciding to have an abortion was already a difficult decision, but for me at the time it was the right one,” said Kim, who like the other women interviewed for this story asked to use a pseudonym for fear of legal repercussions. “After I made that choice, all the law did was add to my trauma.”

The fight to legalise abortion has become the latest battlefield in growing feminist movement in South Korea. Supporters of a repeal of the ban were gearing up for a victory at South Korea’s constitutional court, in a case brought by a doctor who was prosecuted for performing 70 abortions, before political infighting over the appointment of justices paralysed deliberations and delayed the verdict indefinitely.

A recent protest in the heart of Seoul drew 3,000 women, but in a sign of how sensitive the issue remains, almost all the participants wore black surgical masks to hide their identity and organisers worked to censor any photos taken by curious citizens that could identify individuals.

South Korea remains one of the few wealthy nations where abortion is illegal, criminalised under a 1953 law that has been selectively enforced over its history based on government whims. The ban was relaxed in 1973 for rape victims and couples with certain hereditary diseases.

“People’s sexual behaviour and relationships have changed quite a bit and this law is denying the changes that have happened in society,” said Lee Bong-joo, dean of the college of social science at Seoul National University. “We have this ban but in practice we know abortion is happening illegally, so the ban is just making something that’s already happening more dangerous and expensive.”

South Korea’s health and welfare ministry estimates that about 169,000 illegal abortions were performed in 2010, the last year for which statistics are available. But researchers say the government has long underestimated those figures. Park Myung-bae, a professor at Pai Chai University, said the total was probably as high as 500,000 in 2016, exceeding the number of babies born that year.

Women can be jailed for up to a year and fined 2m won (£1,363), while local media has reported cases where men, usually husbands or former boyfriends, use the law to blackmail women, or reveal their abortion as a form on retribution.

“The right to safe and legal abortions is a crucial step toward increasing Korean women’s health, equality and freedom,” Miliann Kang, a professor of gender studies, and activist Arum Yoon wrote in a recent op-ed.

Punishment for doctors who perform abortions can be as much as two years in prison, but individuals are rarely prosecuted and the practice remains widespread, with many doctors willing to accept fees ranging from 1.5m won to more than 2.5m won for the procedure.

Another method that is increasingly popular is ordering abortion pills on the internet through groups such as Women on Web, which ships the medication in discreet packaging to women in places where the practice is restricted.

Lee Min-ji was a 24-year-old student preparing for a medical degree when she realised she was pregnant, and knew about Women on Web from a previous scare. While the pills ended her pregnancy, she still had to have an operation to remove excess tissue from her uterus.

Lee, a practising Christian, viewed it as “a punishment for my sin; I thought I was going to die”, she said.

Even if the ban is reversed, she worries the social stigma will be hard to shake.

“If abortion is legal, it still wouldn’t be perfectly acceptable; there are still so many social pressures.

“Doctors will still be judgmental, and to this day this is the only secret I have ever kept from my mother, and she’s my best friend.”

Members of the country’s sizeable Christian minority have been outspoken opponents and the president, Moon Jae-in, has avoided supporting either side, saying only that his administration would research the issue. The government may be reluctant to repeal the law as South Korea faces a looming fertility crisis and has spent more than £100bn to increase the birth rate.

Anna, a Swedish exchange student who used Women on Web when she became pregnant while studying in Seoul, said she was surprised to learn abortion was illegal.

“The entire experience change my perception of South Korea,” she said. Discovering the ban “really clashed with my vision of the country as a modern and developed society”.

Conflicted Italy hovers on the brink of renewed hard times