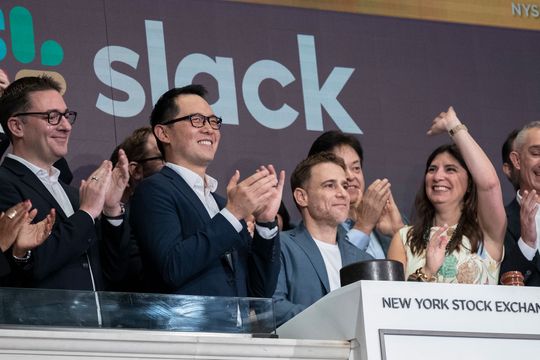 Analyst Keith Weiss cuts rating to a rare underweight, with a price target that is about 6% below current levels

Shares of Slack Technologies Inc. sank Wednesday, after Morgan Stanley analyst Keith Weiss turned bearish on the business communication software company, citing concerns that the company is losing out to competition as more people work from home during the COVID-19 pandemic.

The stock WORK, -6.29% dropped 6.7% in afternoon trading, and has now lost 12.1% amid a six-day winless streak. The current streak started by snapping an eight-day win streak in which the stock rallied 17.8%.

Morgan Stanley’s Weiss cut his rating to underweight, within an industry that is rated in line. His stock price target of $27 is 6.1% below current levels.

Of the 24 software companies that Weiss covers, Slack is now just the second that he rates underweight.

Weiss is worried that “massive” demand for work-from-home (WFH) collaboration tools may end up doing more hard than good for Slack, which suggests a higher risk for investors at current stock prices.

“With [a] CIO survey showing a fading positioning versus an intensifying competitive landscape, Slack remains challenged in proving its differentiation for information worker use cases, while Microsoft Teams/Zoom win an outsized share of the COVID spending rush,” skewing the stock’s risk-versus-reward outlook to negative, Weiss wrote in a note to clients.

“In many cases, Slack did not have the opportunity to properly pitch its differentiation, and in our view, the customers that have standardized on Microsoft Teams are not looking back — the product is working well and has become an important part of daily work for many customers,” Weiss wrote.

“Additionally, we have seen the ubiquity of Zoom translate to a rising number of CIO’s indicating plans to standardize on Zoom for Team Collaboration, creating an increasingly competitive market, especially given Google’s presence and its Google Workspace offering gaining momentum (CIOs [are] expecting to increasingly standardize on Google Workspace over the next three years).”

Slack’s stock has lost 27.9% since it closed at a post-COVID record of $39.90 on June 3. Meanwhile, Zoom Video’s stock reached a record as recently as Oct. 19, and shares of Microsoft and Google-parent Alphabet Inc. closed at records on Sept. 2.