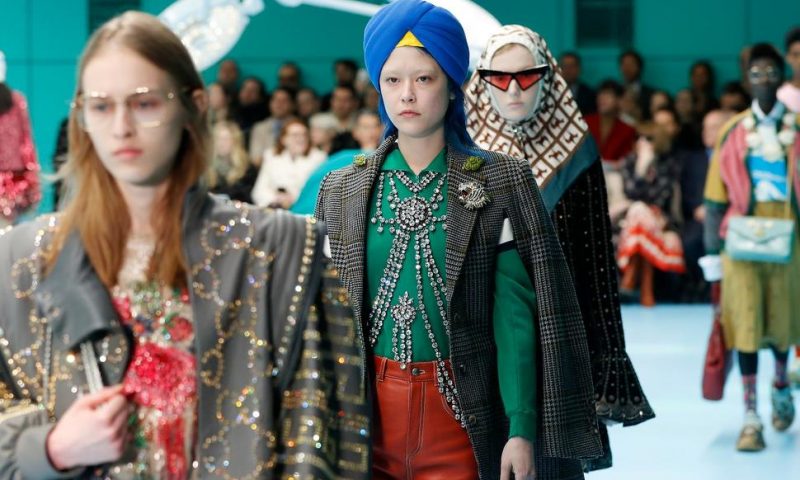 The top civil rights organization for Sikhs in the United States says Nordstrom has apologized to the community for selling an $800 turban they found offensive, but they are still waiting to hear from the Gucci brand that designed it.

PHOENIX — Nordstrom has apologized to Sikhs for selling a turban they found offensive, but a representative with the U.S. community’s top civil rights organization said Saturday they are still waiting to hear from the Gucci brand that designed it.

“We feel that companies are commodifying and capitalizing on something that is dear and sacred to people around the world,” said Simran Jeet Singh, a senior fellow with the New York-based Sikh Coalition, who said the turban has a deep religious significance for the men of his faith.

“And there is tension over the fact that the very article of our faith has been the focus of so much hate and violence and bullying,” he said, recalling that Sikhs wearing turbans have been attacked in hate crimes, including a man killed near Phoenix a few days after 9/11.

The current complaint springs from a Gucci head wrap that until Wednesday was advertised on Nordstrom’s website for $790 as the “Indy Full Turban.” The description said the “gorgeously crafted turban is ready to turn heads while keeping you in comfort as well as trademark style.”

The Nordstrom website on Saturday still had a reference to a Gucci “head wrap,” but it was listed as sold out and it was no longer pictured.

“We have decided to stop carrying this product and have removed it from the site. It was never our intent to disrespect this religious and cultural symbol. We sincerely apologize to anyone who may have been offended by this,” the department store said in a tweet.

Gucci’s turban was first talked about last winter, when a white model walked the runway wearing it during a fashion show.

Gucci had not responded to the criticism over the product by Saturday. Emails seeking comment were sent to Gucci through its public relations representatives and a corporate fashion services website.

“When companies appropriate articles of faith, they do not take into consideration the discrimination Sikhs face while adhering to the tenets of their faith. We appreciate @Nordstrom’s recognition of this problem & apology; we hope @Gucci will follow suit,” the Sikh coalition said in a Thursday tweet.

The coalition was formed after Balbir Singh Sodhi, a bearded Sikh American wearing a turban, was shot and killed on Sept. 15, 2001, in the Phoenix suburb of Mesa when he was mistaken for an Arab Muslim.

Frank Roque, 42, was quoted in police reports as saying “all Arabs had to be shot” and he wanted to “slit some Iranians’ throats.” Roque is serving a life sentence in prison for first-degree murder.

In another attack on the community, a white supremacist opened fire on a Wisconsin Sikh temple in 2012, killing six people and wounding five others before killing himself.

Sikhs across the United States and around the globe have taken to social media to lambaste Gucci, including Taran Parmar, a radio journalist for News 1130 in Vancouver, Canada.

“Seriously @Nordstrom @gucci ?” she wrote. “The turban is one of the most important and symbolic articles of faith for Sikhs, and you’re selling it as a fashion accessory to make money? This isn’t the first time you’ve come under fire for cultural appropriation. Do better.”

Gucci in recent months has grappled with complaints from the black community in the U.S. over a sweater people found offensive.

Gucci President and CEO Marco Bizzarri this month attended a Gucci-sponsored event in New York’s Harlem in addition to a recent fashion show featuring London-based black designer Ozwald Boateng at the Apollo Theater to mark the 100th anniversary of the Harlem Renaissance.

In February, the brand apologized and removed from its online and physical stores a turtleneck black wool balaclava sweater that could be pulled over the chin and nose. It included a slit along the mouth, ringed with what look like giant red lips and evoked blackface for many people.

Also in February, Katy Perry’s fashion line pulled two types of shoes featuring protruding eyes, nose and red lips that critics likened to blackface. The singer and company said they were saddened it was being compared to blackface and said the designs rather were envisioned as a nod to “modern art and surrealism.”

US: Iran Military Could Misidentify Airliners Amid Tension