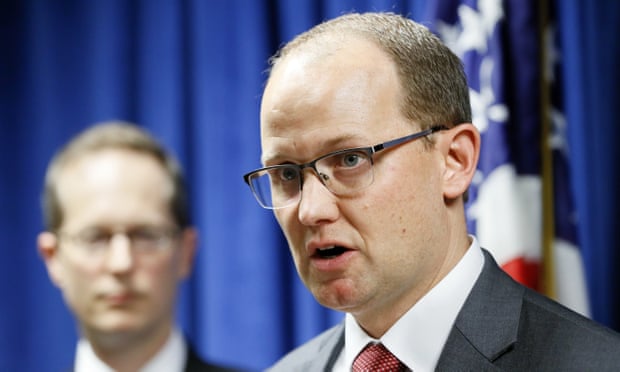 A spy for the Chinese ministry of state security has been arrested and indicted on charges of economic espionage and attempting to steal trade secrets from several US aviation and aerospace companies, according to the justice department.

Yanjun Xu, a deputy division director for the ministry’s Jiangsu state security department, is accused of targeting several aerospace companies, including GE Aviation, a subsidiary of General Electric Co, the justice department said in a statement.

Court papers document how Xu and other intelligence operatives planned to obtain “highly sensitive information” from the experts.

The indictment alleges that, from around December 2013 until his arrest in April, Xu would recruit employees from major aerospace companies and convince them to travel to China on the pretext of giving a presentation at a university, prosecutors said.

“This indictment alleges that a Chinese intelligence officer sought to steal trade secrets and other sensitive information from an American company that leads the way in aerospace,” said John Demers, the assistant US attorney general for national security.

The charges come as the United States increases pressure on China over its trade policies and alleged theft of US companies’ intellectual property.

Last week US vice-president Mike Pence painted China as rival of the United States on all fronts, repeating Donald Trump’s allegations that Beijing has attempted to meddle in the upcoming US midterms.

“What the Russians are doing pales in comparison to what China is doing across this country,” Pence said in a speech.

Justice officials cast the arrest of Xu as part of the global fight against China’s alleged campaign to steal US economic secrets.

“This case is not an isolated incident. It is part of an overall economic policy of developing China at American expense,” said assistant attorney general Demers.

According to the indictment, Xu recruited a GE Aviation employee, who sent him a presentation in February that contained the company’s proprietary information. Xu later followed up with the employee asking for specific technical information and then asked the employee to meet in Europe, where he wanted the worker to provide additional information from GE, according to court papers.

GE Aviation is a top manufacturer of jet and turboprop engines and components for commercial, military, business and general aviation aircraft. It has supplied engines for large Boeing Co and Airbus SE planes, and is working on a new generation of engines for commercial planes and heavy-lift military helicopters.

The ministry of state security is China’s intelligence and security agency, responsible for counterintelligence, foreign intelligence and political security. It has broad powers to conduct espionage domestically and abroad, the statement said.

“This unprecedented extradition of a Chinese intelligence officer exposes the Chinese government’s direct oversight of economic espionage against the United States,” said Bill Priestap, the assistant director of the FBI’s counterintelligence division.

Xu was arrested after traveling to Belgium in April. After his appeals failed, he was extradited to the United States on Tuesday and is scheduled to make his first court appearance on Wednesday afternoon in federal court in Cincinnati, Ohio.

The Washington Post reported that he was lured to Belgium by US federal law enforcement agents.

Demers said the case was a “significant economic espionage matter” and was the latest proof that China is trying to steal information from American companies.

A spokesman for GE Aviation, a General Electric Co division based in suburban Cincinnati, said it had been cooperating for months with the FBI in a case that targeted a former employee.

“The impact to GE Aviation is minimal thanks to early detection, our advanced digital systems and internal processes, and our partnership with the FBI,” a GE Aviation spokesman, Perry Bradley, said.