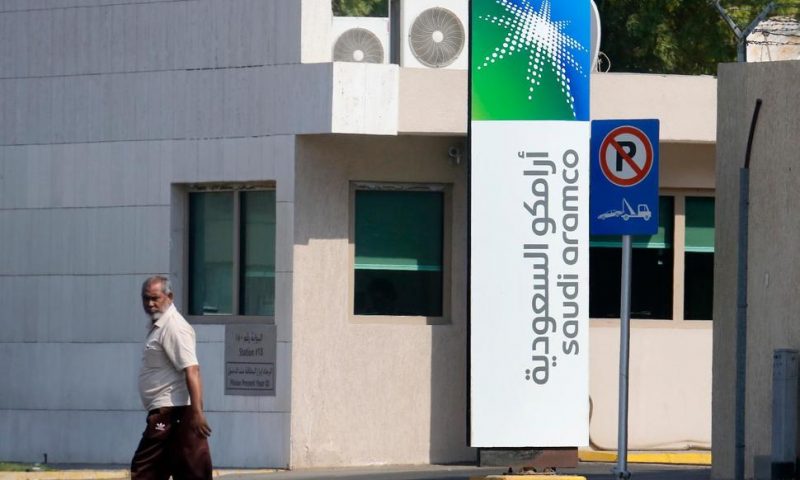 DHAHRAN, Saudi Arabia — Saudi Arabia formally began an initial public offering Sunday of a sliver of oil giant Saudi Aramco after years of delay, hoping international and local investors will pay billions of dollars for a stake in the kingdom’s crown jewels.

An approval by Saudi Arabia’s Capital Market Authority served as the starting gun for an IPO promised by Crown Prince Mohammed bin Salman since 2016. But unlike traditional IPOs, Saudi Aramco offered no hoped-for price range for its shares nor any idea how much of the firm would be offered to investors on Riyadh’s Tadawul stock exchange.

Analysts say the kingdom likely hopes local investors will push its share prices toward a desired $2 trillion valuation and buoy that price ahead of any possible further listing abroad. Saudi Aramco also made a point in its filings to highlight its profitability and low costs through newly released data once held as a state secret by the Al Saud royal family, euphemistically referred to by the company as its “current shareholder.”

However, economic worries, the trade war between China and the U.S. and increased crude oil production by the U.S. has depressed energy prices. A Sept. 14 attack on the heart of Saudi Aramco already spooked some investors, with one ratings company already downgrading the oil giant.

“We want to share the Aramco shares with the citizens of Saudi Arabia,” said Yasir al-Rumayyan, the governor of Saudi Arabia’s Public Investment Fund. “We want to get financial investors from all over the world.”

It’s hard to overstate the power of the oil firm, known formally as the Saudi Arabian Oil Co. It produces over 10 million barrels of crude oil a day, some 10% of global demand. The firm’s net income in 2018 was $111.1 billion, far beyond the combined net income of oil giants BP PLC, Chevron Corp., Exxon Mobil Corp., Royal Dutch Shell PLC and Total SA.

Saudi Arabia’s oil sits close to the surface in large pools, making it far cheaper to extract. Saudi Aramco also has proven liquid reserves of 226.8 billion barrels, the largest of any company in the world and “approximately five times larger” than those held by the five oil giants, according to the firm’s IPO documents.

That’s led to a clamoring from investors for Saudi Aramco stock since Prince Mohammed announced plans in 2016 for a two-phase IPO of 5% of the firm in the kingdom and abroad. The prince hopes to raise some $100 billion from investors, which will be funneled into the kingdom’s PIF sovereign wealth fund for projects to boost employment and major development projects.

But the planned IPO saw years of delays over valuation concerns and where to list it abroad. Oil prices, once over $100 a barrel, crashed in 2014 to under $30 a barrel. Benchmark Brent crude now trades around $60 a barrel, pushed up by a production cut by OPEC countries like Saudi Arabia and those outside of the cartel like Russia. Those cuts have limited Saudi production, in turn pushing up its estimated government budget deficit for next year to nearly $50 billion.

The announcement by the Capital Market Authority offered no timeline, share price or percentage of the company to be offered in the IPO, nor did officials or documents later released by Aramco. Both al-Rumayyan and Saudi Aramco CEO and President Amin H. Nasser also declined to say whether an international listing would still happen as well when addressing journalists in Dhahran in eastern Saudi Arabia, the city that hosts Saudi Aramco’s headquarters.

“Usually when you go for an IPO, you have a target price,” said Capt. Ranjith Raja, an oil analyst at data firm Refinitiv. “There’s still no clarity in what they’re trying to look at.”

Based on that, Saudi Arabia may choose to rely on local investors to push up the price of the stock, Raja said.

The Saudi-owned satellite channel Al-Arabiya reported last week, citing anonymous sources, that pricing for the stock will begin Nov. 17. A final price for the stock will be set Dec. 4, with shares then beginning to be traded on the Tadawul on Dec. 11, the channel reported. The channel is believed to have close links to the kingdom’s Al Saud royal family and correctly identified Sunday as the IPO’s launch.

Analysts say a $2 trillion valuation — Apple and Microsoft separately for instance are $1 trillion — may be a stretch. By announcing the start of the IPO on Sunday, Prince Mohammed may have been convinced to take a lower valuation in order to get the IPO moving.

Saudi Aramco has sought to assure investors, given the questions over its valuation and the potential hazards of future attacks or geopolitical risk. A presentation posted to Aramco’s website last month announced the intent to offer a $75 billion dividend for investors in 2020. That’s the payment per share that a corporation distributes to its stockholders as their return on the money they have invested in its stock.

It also pledged that from 2020 through 2024, any year with a dividend under $75 billion would see “non-government shareholders” prioritized to get paid.

But beyond the stocks, worries persist that Saudi Arabia could be hit by another attack like the one Sept. 14, which temporarily halved its production. The U.S. blames the attack on Iran. Tehran denies it launched the cruise missiles and drones used in the assault. Yemen’s Houthi rebels claimed responsibility, but analysts say the weapons used wouldn’t have the range to reach their targets from Houthi-controlled areas of Yemen.

Responding to a journalist’s question about the safety of an Aramco investment, al-Rumayyan spoke about how quickly the company restored production after the attack.

“The oil traders, they saw this as a nonevent, and that means it is really safe,” he said. “That’s what the money is saying.”