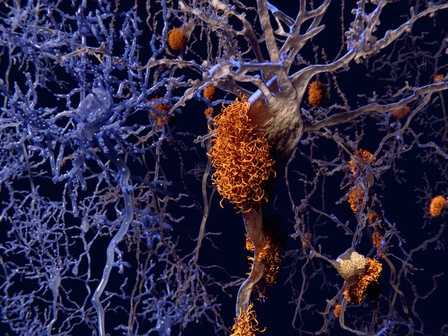 As Eli Lilly and Biogen stir up hope in the Alzheimer’s disease drug space, Roche’s pharma CEO is not getting dragged into hype over its effort gantenerumab.

Roche is certainly committed to gantenerumab, an antibody that binds to and clears aggregated beta amyloid fibers, despite it failing a phase 3 trial back in 2014. The Swiss pharma resurrected gantenerumab in 2017 and is now running two more phase 3 trials, although it was hit by another setback last year.

That came from a phase 2/3 study, sponsored by Washington University School of Medicine, with support from groups including Lilly and Roche. Investigators randomized 194 people with an early-onset, inherited form of Alzheimer’s to take either Lilly’s solanezumab, Roche’s gantenerumab or placebo and tracked them for up to seven years.

Both of these anti-amyloid beta antibodies failed to improve outcomes, with the findings showing neither drug was effective in dominantly inherited Alzheimer’s disease (DIAD). The primary endpoint tracked cognition annually for four years using four tests of early-stage disease, the results of which were combined to give a composite score.

Lilly has already seen enough data to say it has no plans to seek approval in the subpopulation of DIAD patients enrolled in the phase 2/3. Solanezumab has already failed in the broader Alzheimer’s population, leading Lilly to give up on the asset in 2016, but it’s still working through a study, A4, in people with amyloid buildup but no signs of cognitive impairment.

The Big Pharma did chalk up a small win last month, however, with a different asset: donanemab (once known as LY3002813), which works an active immunotherapy designed to stimulate a patient’s immune system to attack and destroy beta amyloid plaques that are believed to form in the brain and spur the memory-wasting disease.

Its antibody goes after a modified form of beta amyloid called N3pG, and targeting this produced in its midstage results a “significant slowing of decline in a composite measure of cognition and daily function in patients with early symptomatic Alzheimer’s disease compared to placebo.”

It did not hit all of its secondaries and details were sparse, but shares still jumped on the news last month.

The drug that has come closest to backing up this amyloid idea is Biogen’s aducanumab, which binds to aggregated beta amyloid and causes it to be cleared from the body.

It had, in fact, been on the edge of being scrapped, but Biogen drilled down into the data and thought it saw a glimmer of hope, so it’s gone to the FDA for approval. Its PDUFA was originally set for March, but an expert outside panel said it shouldn’t be approved late last year.

Last month, the FDA said it was in fact delaying a decision on the med by as much as three months, until June 7. Usually, this is bad news, but Biogen’s shares jumped, presumably as a sign that it might be approved, as it wasn’t an outright rejection.

Despite the roller coaster ride in Alzheimer’s over the years, and Roche’s own failure in DIAD patients, the Swiss major last year talked up the differences between the phase 2/3 flop and its ongoing late-phase studies to explain its continued confidence that gantenerumab may succeed.

Outside observers took a different position. Analysts at Jefferies expected the phase 2/3 trial to fail and accepted that the small size of the study and initial use of potentially suboptimal doses may have contributed to the lackluster data. Even so, the analysts said the failure “again suggests the ongoing gantenerumab phase 3 studies are high risk.”

Roche is set to find out whether that risk has paid off when it posts data from the phase 3 program in 2022. The program is assessing whether increasing the gantenerumab dose above the level used in earlier, failed trials will lead to better outcomes.

Given the talking up of Alzheimer’s prospects once again in the face of the glimmers from Biogen and Lilly, analysts on Roche’s financial call Thursday were quick to ask about how the C-suite viewed the future of gantenerumab, and that ongoing test.

For once, the answer was measured (and very different from highly bullish Biogen at the J.P. Morgan healthcare conference last month, which also pointed to Lilly’s data as more hope for its once-failed candidate).

“Well, believe me, it’s on all of our minds,” said Roche’s pharma chief Bill Anderson of the drug. “We have lots of reasons to believe, and we have reasons to be concerned. Until there’s a definitive, unassailable, pivotal result or pair of pivotal results, I think we have to handicap all these studies. And that’s just how it is when you’re pioneering in a new area. So, I can give you the five reasons we’re excited. And then I would still say, I don’t know.”

He said, on reflection, success is likely a tossup. “This is a difficult, difficult disease,” he said. “We don’t understand the pathophysiology of Alzheimer’s disease, and we’re targeting something that is in a huge evidence that it’s linked to Alzheimer’s, but the causative role that it plays, we don’t know. And the data that came out from another company (Eli Lilly), they did last quarter, people got really excited about, and I want to be excited to. But again, that’s a little bit of a slight tweak on the MoA. It’s a novel endpoint. It’s a small data set. And we haven’t seen the data yet. So I’m not going to take that and run off to celebrate.”