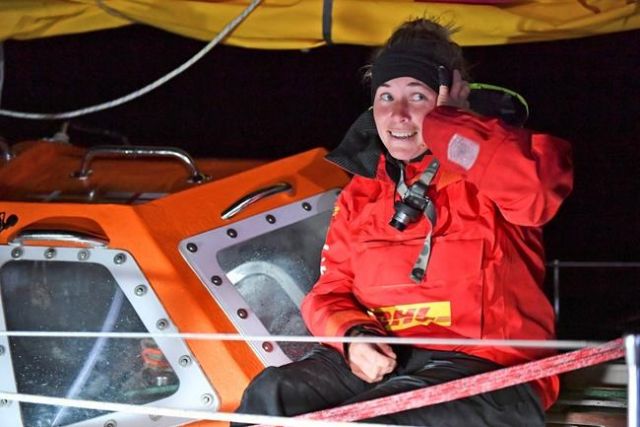 A cargo ship on Friday rescued a British sailor after a violent storm ripped off her mast and flung her yacht end over end in the Southern Ocean as she competed in a solo round-the-world race.

British sailor Susie Goodall tweeted “ON THE SHIP!!!” soon after the Hong Kong-registered MV Tian Fu arrived at her location. The cargo vessel had been travelling from China to Argentina when it diverted to reach her.

Race officials have been in regular radio contact with the 29-year-old Goodall, who lost her mast 3,200 kilometres west of Cape Horn near the southern tip of South America.

Her rescue unfolded early Friday, when the Tian Fu found Goodall an hour before daylight. In a message to race officials, she confirmed that she had sighted the Tian Fu and that sea swells were up to four metres.

But that was only the beginning of her troubles Friday. Goodall’s engine failed and could not be restarted, limiting her ability to manoeuvre. Without an engine, her stricken yacht, the DHL Starlight, had to drift with its sea anchor before the master of the MV Tian Fu could manoeuvr the 40,000 ton cargo ship alongside it.

Goodall was the youngest entrant and the only woman in the Golden Globe competition that began July 1 in Les Sables-d’Olonne, France. Only five of the 18 skippers who began the race still remain. They are trying to sail roughly 48,000 kilometres alone, non-stop and without outside assistance before returning to the same French port.