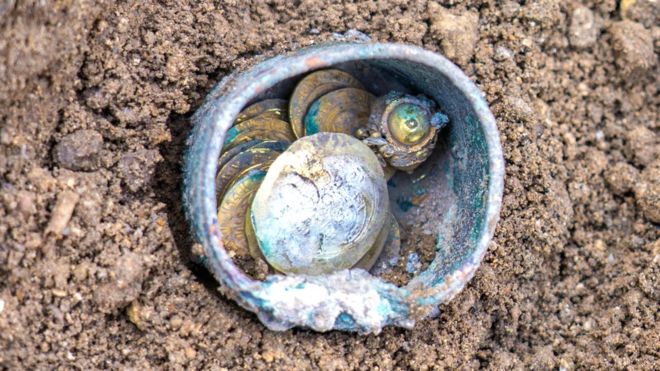 A collection of gold coins believed to have been hidden 900 years ago has been discovered by archaeologists in the ancient Israeli port city of Caesarea.

The rare cache was found – along with a single gold earring – in a bronze pot between stones in the side of a well.

The hoard of 24 coins appears to have been hidden by someone who hoped to retrieve it, but never returned.

Archaeologists say the owner may have died when the city’s inhabitants were massacred by a Crusader army in 1101.

The discovery was made during an excavation and conservation project at the Caesarea World Heritage site.

The 11th-Century coins were found between two stones in the side of a well at a house in a neighbourhood dating to the Abbasid and Fatimid periods.

“The cache is a silent testimony to one of the most dramatic events in the history of Caesarea: the violent conquest of the city by the Crusaders,” archaeologists from the Israel Antiquities Authority said.

They added that, according to written sources, most of the inhabitants of Caesarea were massacred by the army of Baldwin I, who ruled the Crusader kingdom of Jerusalem between the years 1100 and 1118.

“It is reasonable to assume that the treasure’s owner and his family perished in the massacre or were sold into slavery, and therefore were not able to retrieve their gold,” said the directors of the excavation, Dr Peter Gendelman and Mohammed Hatar.

The latest discovery was found near the location of two other treasures of the same period – a pot of gold and silver jewellery found in the 1960s and a collection of bronze vessels found in the 1990s.

These treasures are currently displayed at the Israel Museum in Jerusalem.

In 2015, scuba divers inadvertently discovered the largest trove of gold coins ever found off Israel’s Mediterranean coast. About 2,000 pieces dating back more than 1,000 years were spotted on the seabed by members of a diving club.