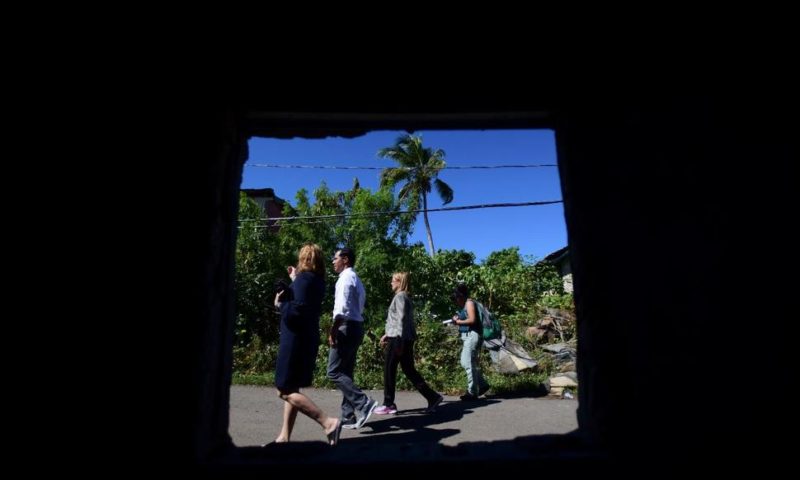 President Trump is criticizing Democrats for traveling to the island. But Democrats are fighting back.

ITS U.S. CITIZEN residents don’t get a say in the general election for president, and it’s still struggling to recover from a devastating 2017 hurricane. But Puerto Rico is getting a little love from power players in politics and the arts, offering some hope that the island will have its many problems addressed as America prepares for the 2020 elections.

Former Housing and Urban Development Secretary Julian Castro made Puerto Rico his first trip after announcing over the weekend he was running for the Democratic nomination for president in 2020. The Latino Political Summit is in San Juan this week for its annual summit. BOLD PAC, the campaign arm of the Congressional Hispanic Caucus, is also on the island this week with a contingent of more than 30 members of Congress – the biggest group of sitting federal legislators ever to visit the island, according to the PAC. And to add some star attention, award-winning playwright and performer Lin-Manuel Miranda is reprising his lead role in “Hamilton” in San Juan, attracting both celebrity theater-goers and donations to the troubled island.

The members of Congress were there to discuss post-hurricane Maria recovery efforts, among other things. Some finished the trip with a charity performance of “Hamilton.”

The winter visit to the Caribbean island brought derisive comments from the White House. Press secretary Sarah Sanders accused Democrats of “partying on the beach” during the shutdown, while President Donald Trump accused them of “celebrating” the nation’s longest-running federal government shutdown.

“I’ve been here all weekend. A lot of Democrats were in Puerto Rico celebrating something,” Trump told reporters on the South Lawn of the White House before heading to a farm bureau convention in New Orleans. “I don’t know, maybe they’re celebrating the shutdown,” added the president, who is warring with congressional leaders over how to re-open the partially-shuttered government.

For lawmakers – local and visiting – in Puerto Rico, Trump was the punching bag. Critics blasted the president for an inadequate response to the hurricane and for suggesting he would divert hurricane relief aid from Puerto Rico to build a wall along the Southern border that Congress has not approved.

Castro, so far the only Latino in the presidential race, said Trump showed no respect for the island and – using a word Trump loves to lob at his foes – said the president had “failed” Puerto Rico.

“The administration failed to prepare for the hurricane, it failed to coordinate a swift response and has failed in the recovery process as well,” Castro told the summit, an event by the Latino Victory Fund, which works to elect Hispanics to office. “What’s worse, … the president … has talked about possibly taking money that had been earmarked for Puerto Rico recovery and instead investing that in a border wall. To do so is completely objectionable, immoral and should never happen,” Castro said.

Puerto Ricans cannot vote in the general election, but they do vote in presidential primaries. The primaries tend to get little attention, although both Barack Obama and Hillary Clinton campaigned on the island in 2008, when the Democratic primary was neck-and-neck.

The visits to Puerto Rico now are more directed at appealing to the Hispanic vote, which could – in theory, at least – be determinate in several states. Democrats have gotten the support of a strong majority of Hispanic voters overall for decades, but the party has been criticized for taking the vote for granted and not reaching out early enough – especially in critical regions.

For example, 69 percent of Hispanic voters cast a ballot for Democrats in the midterms, compared to 29 percent who voted for Republicans, according to a Pew Research Center study.

But in Florida’s razor-thin elections for governor and the U.S. Senate seat last November, the GOP candidates took nearly half the Latino vote, according to exit polls, helping to sew up their victories.

“I don’t think the shock waves have worn off for Democrats” after faring so poorly among Puerto Rican voters in particular in Florida in November, says Fernand Amandi, a principal with Florida-based communications and consulting firm Bendixen & Amandi International, which specializes in Latino politics.

Democrats waited too long and did too little to attract Latinos voters, while the Florida GOP “engaged them and cultivated them in a way Barack Obama did in 2008 and 2012,” Amandi adds. Since Puerto Rico’s political factions are divided among statehood, commonwealth and independence, voters there don’t identify as strongly with a political party, he adds. So people angry with Trump might not necessarily take it out on other Republican contenders.

Democrats are hoping to turn it around in 2020 with Puerto Ricans in Florida (especially the estimated 150,000 who migrated to the Sunshine State after being displaced by Maria. And they are also trying to make Trump’s response to the island an issue for Latino voters of all background.

“We are all Latinos first, and we have to take care of each other,” San Juan Mayor Carmen Yulin Cruz, a frequent Trump critic, told the summiteers.