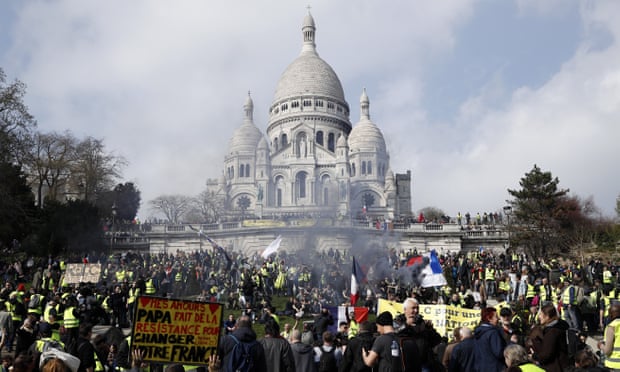 Gilets jaunes demonstrations in Paris on Saturday largely peaceful, but turned violent in the late afternoon

Police and demonstrators clashed sporadically in Paris and other French cities on Saturday as gilets jaunes protests against President Emmanuel Macron’s government took place for a 19th consecutive weekend.

The demonstration in the capital was largely peaceful for most of the day, but later in the afternoon police fired teargas on protesters near Boulevard de Strasbourg, close to the capital’s Gare du Nord and Gare de L’Est railway stations.

Skirmishes also erupted in cities including Lille in northern France, and Toulouse and Montpellier in the south, but there were no immediate reports of injuries.

For the first time , the government deployed Operation Sentinelle military units to back up police after shops on the capital’s famous Avenue de Champs-Élyséeswere looted and vandalised during last weekend’s protests.

Protesters were banned from gathering on the Champs-Élysées, but demonstrators descended on other parts of the capital. Earlier in the day, they marched from Denfert-Rochereau in southern Paris, to the Sacre-Coeur church in the north.

A yellow awning was briefly draped across the top of the Sacre-Coeur, before being taken down by authorities.

Turnout estimates for this week’s demonstrations were due to be announced later on Saturday.

The “yellow vests” protests, named after the high-visibility vests French drivers have to keep in their cars and worn by protesters, began in November after public anger against fuel tax rises.

The movement has morphed into a broader backlash against Macron’s government, despite it scrapping the fuel taxes, and has often been marred by violent clashes and looting of shops.