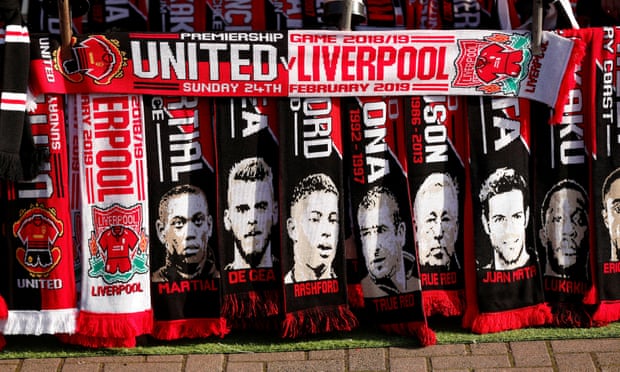 Taking part in the Premier League title race can be worth hundreds of millions of pounds to a football club’s home city, according to a report that said Manchester City and Liverpool are squaring up for a £300m battle.

The report by the thinktank Centre for Economics and Business Research (CEBR) said competing for a league title could increase a city’s economic growth by 1.1 percentage points.

It said this would be worth £220m to Manchester, with Abu Dhabi-owned Manchester City hopeful of winning the league, while Liverpool is in line for a £133m boost from the team’s effort to end a 29-year wait for the title.

The effect mirrors that enjoyed by countries that reach the later stages of the World Cup, such as the economic uplift seen in England last summer, the CEBR said.

The difference between the increase predicted for the two cities is because Manchester’s economy is larger, and the Etihad stadium has a slightly larger capacity than Anfield.

The CEBR attributed the economic gains to increased spending on match-day tickets, merchandise and local hospitality when people are feeling positive about their club and matches are well attended.

Even when fans don’t go to the games, they are likely to spend money locally watching televised fixtures in pubs and bars, while the feelgood factor among fans enjoying success leads to a general increase in consumer spending among supporters.

The CEBR said psychological research indicates that fans associate the performance of their chosen team with their own successes and failures, which can have an impact on people’s dopamine levels and overall confidence, resulting in higher spending on outings and goods.

To back up its analysis, the CEBR looked at the Premier League’s final standings since 1999 to see if the cities that hosted the top three teams enjoyed higher economic growth in years they performed well compared with seasons when they didn’t.

Their analysis showed that a city’s gross value-added growth – a measure that looks at the value of goods and services produced – was on average 1.1 percentage points higher when it had a football team that finished in the top three.

The CEBR pointed to research by the Leicester Castle Business School after Leicester City’s surprise Premier League win in 2016 that found that extra attendance at the King Power stadium led to an expenditure increase in the city of £224,000. There was an additional £22.6m of spending in the hospitality sector, with takings up by as much as 300% over five key matches.

Between 1990 and 2014, the four countries that reached the semi-finals of the World Cup had growth in consumer spending of 4.5% in the following year, compared with an average of 3.3% growth in the year before the tournament, according to a study by Lloyds Bank.

The three friends behind a $1bn healthy fast-food firm