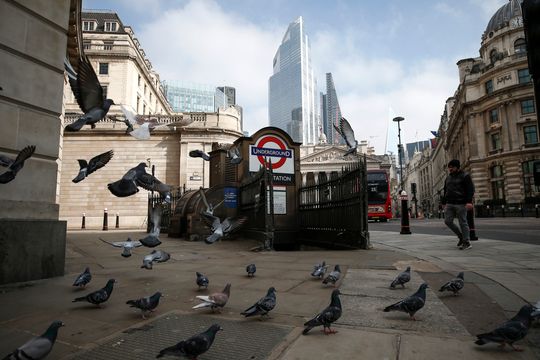 The British pound rose on Monday as two Bank of England officials dropped hints of a more hawkish policy over the weekend, with those comments weighing on U.K. stocks despite strength in energy prices.

The pound GBPUSD, 0.15% rose 0.2% to $1.3665 after Michael Saunders, a member of the central bank’s Monetary Policy Committee, said markets weren’t wrong in betting on higher interest rates, with inflation creeping up above 4%.

“I’m not in favor of using code words or stating our intentions in advance of the meeting too precisely, the decisions get taken at the proper time. But markets have priced in over the last few months an earlier rise in Bank rate than previously and I think that’s appropriate,” Saunders told The Telegraph in an interview that published on Saturday.

“The February one is fully priced in and for December, it’s half priced in…I think it is appropriate that the markets have moved to pricing a significantly earlier path of tightening than they did previously,” he said.

Also on Saturday, Bank of England Gov. Andrew Bailey told the Yorkshire Telegraph that he was concerned over above-target inflation. “We are going to have a very delicate and challenging job on our hands so we have got to in a sense prevent the thing becoming permanently embedded because that would obviously be very damaging,” he said.

The comments come ahead of some key economic updates in the U.K. this week include employment data on Tuesday and August growth data on Wednesday.

“We think that the BoE’s current narrative, in particular its failure to push back against markets pricing three hikes between now and mid-2022, is evidence that the MPC is attaching a sizable weight to the risk that (unobserved) trend growth is lower and the output gap (or labor market slack) higher than we think,” said Barclays analysts Fabrice Montagne and Abbas Khan of Barclays, in a note to clients.

The FTSE 100 index UKX, 0.52% was barely higher at 7,102.75, bucking a weaker trend across European indexes. A stronger pound can weigh on international companies listed on the FTSE that derive part of their revenue from overseas.

U.S. oil benchmark pushes back above $80 a barrel