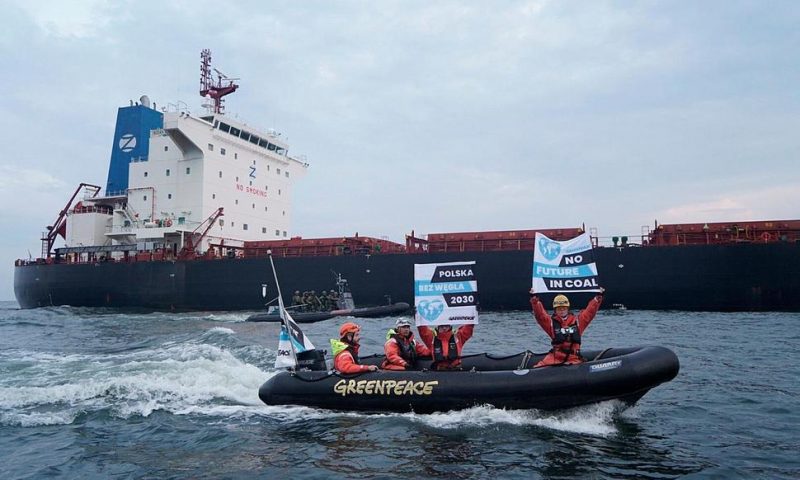 Greenpeace says armed, masked Polish border guards boarded their ship as it was trying to block a delivery of coal, arresting activists and seizing the vessel.

WARSAW, Poland — Armed, masked Polish border guards boarded a Greenpeace tall ship as it was trying to block coal from being delivered to the port of Gdansk, arresting activists and seizing the vessel, the group said Tuesday.

Greenpeace said its activists had been holding a “climate emergency protest” to press Poland to phase out its heavy dependence on coal, a fossil fuel that contributes to global warming. Poland uses coal for 80% of the energy needs of its over 37 million people, according to official statistics from 2018.

Video footage from Greenpeace showed the armed guards breaking a window to get into the captain’s bridge on the Rainbow Warrior, a tall sailing ship, and shouting that everyone should drop to the floor. The boarding occurred about 11 p.m. Monday.

Marek Jozefiak of Greenpeace said the ship’s captain and one activist remained detained Tuesday, along with the ship. Jozefiak, the coordinator of Greenpeace’s Climate and Energy campaign in Poland, expressed surprise at vehemence of the border guards’ actions against what he called a “peaceful action in defense of the environment.”

He said for several hours on Monday, activists on the Rainbow Warrior and in smaller boats had blocked a shipment of coal from Mozambique from entering the northern Polish port of Gdansk. They also painted slogans like “Stop Coal,” ”Poland Beyond Coal 2030,” and “No Future in Coal’ on the cargo ship’s side.

Polish border authorities said 18 Greenpeace activists were brought into their local headquarters on Monday night. They said in all, 22 people had their documents checked and that two — the captain, a Spaniard, and an Austrian activist — remain detained on allegations of having violated safe seafaring regulations.

Prosecutors will decide whether they can be released.

China to Boost Serb Military With Drones, Other Equipment