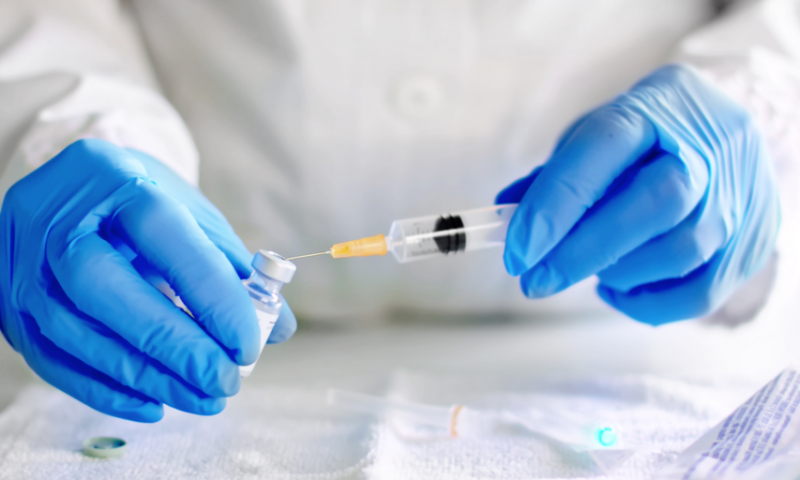 The race to market an RSV vaccine is heating up, with Pfizer reporting protection data for babies born to vaccinated mothers that seem to be on power with Sanofi and AstraZeneca’s shot given straight to infants. While Sanofi is ahead in the development race, the winner will likely be the asset that garners the broadest public health recommendations.

While the data come from a phase 2b that’s largely focused on testing out the vaccine’s safety in pregnant women and their infants as well as has secondary goals related to immunogenecity—or antibody levels—the topline figure is higher than Sanofi’s AstraZeneca-partnered nirsevimab, which is administered straight to infants. A phase 3 showed 75% efficacy in protecting infants from lower respiratory tract infection caused by RSV.

Sanofi was expected to corner the market for infant protection, but SVB Leerink now thinks Pfizer could slice off a bigger piece of the pie thanks to the strong maternal data. SVB Leerink called Pfizer’s phase 2b data “impressive” in the Friday note.

The market for protecting infants from RSV could be worth $3 billion in sales by 2030, with global revenue for all populations reaching $7 billion or more by 2030, the firm predicted.

Pfizer’s latest results for the shot, called RSVpreF, were revealed in abstracts to be presented at the 6th ReSViNET Conference, or RSVVW’21, to be held November 10 to 12.

But Pfizer is not the only one planning to showcase how its shot worked in expectant mothers at the conference. GlaxoSmithKline also gave a peak at phase 2 data, which showed a 10+ fold increase in RSV-A/B neutralizing antibodies, meaning the vaccine is producing the virus fighters needed to build an immune response in the body. This result also matched the antibody data collected for Pfizer’s jab.

“GSK[‘s] and Pfizer’s results suggest that maternal vaccines could be more attractive than we had anticipated, provided their impressive efficacy holds up in phase 3,” SVB Leerink analysts said.

Coincidently to COVID
Many of the top Big Pharmas are scrambling to get their RSV shots to market. “No doubt there is a certain appetite in vaccine companies to capitalize on the excitement and interest created by COVID to advance development of other respiratory virus vaccines, but the emergence of these vaccines now is largely coincidently to the COVID vaccine successes,” SVB Leerink said.

SVB Leerink predicts that Sanofi and AstraZeneca will get there first, but the battle will come down to which company obtains the broadest public health recommendations.

Pfizer latest results could mean some good news for an ongoing phase 3 trial called RENOIR in adults 60 and older, according to SVB Leerink. That trial just got underway in September and will enroll 30,000 participants with the aim of showing that RSVpreF can prevent moderate-to-severe lower respiratory tract illness during the first RSV season after vaccination. Data is expected to be released in the first quarter of 2022.

While Sanofi-AstraZeneca are not testing nirsevimab in the adult population, GSK is and that data from a phase 3 is expected in the first quarter of 2022. GSK’s RSV program has not had a straight path through the clinic. One of the three vaccine candidates was discontinued as a prophylactic in the pediatric population in July, when GSK determined that a phase 1/2 trial was unlikely to prove efficacy.

Data from GSK’s phase 3 GRACE trial in 20,000 expectant women is anticipated in the second quarter of 2022. Pfizer is expecting interim data from a phase 3 trial in the same population, which has 10,000 participants, in mid-2022, but SVB Leerink is not sure the company will disclose at that time—even though it says that the data is likely to be positive.

Sanofi, meanwhile, plans to file for approval in the EU during the first quarter of 2022 and elsewhere (including the U.S.) in the second quarter. Nirsevimab could arrive on the market in 2023 and become the standard of care, replacing Swedish Orphan Biovitrum’s Synagis. SVB Leerink expects sales of €108 million ($125 million USD) in the first year, rising to €514 million ($595.7 million) in 2025.

Pfizer could reach $655 million in sales for RSVpreF in the adult and maternal populations in 2025, although SVB Leerink thinks adults will be the biggest share. GSK is looking at about £176 million ($240.6 million) in the maternal population by 2025.

Sanofi will also present data at RSVVW’21, showing nirsevimab is more effective than Synagis at reducing RSV infections and hospitalizations among all infants. Synagis is the only approved preventive RSV treatment and is limited to use in high-risk infants but must be administered monthly.

GSK, for its part at the RSV conference, will not disclose true efficacy data showing how well infants are protected but did say that the antibody levels persisted in infants for six months following birth. One key question for the maternal vaccines is how long the protection lasts in infants. GSK’s six month antibody data is the first glimpse we have on this measure. Long-term protection outcomes will be closely watched in future readouts for all the companies.

SVB Leerink said efficacy data would have been nice, but the antibody details make the firm “incrementally more positive” about the upcoming readout for the ongoing phase 3 study.

Pivotal trial results from five different RSV programs are expected next year. To sum things up, SVB Leerink said that “2022 [is] shaping up to be the year of RSV.”

Moderna and Johnson & Johnson also have some data to reveal at the conference for their RSV candidates. First up, Moderna’s abstract will show results from a phase 1 trial that the famed biotech’s shot boosted RSV neutralizing antibody titers in healthy participants from children to the elderly through five months after a single dose. The company had previously disclosed one-month data.

J&J’s antiviral treatment, rilematovir, showed signs of “modest” clinical activity in a phase 2 trial of outpatients, which SVB Leerink said is “notable” since antivirals have so far shown little efficacy.

Editor’s Note: This story was updated at 8:30 a.m. ET on Nov. 4, 2021, to clarify that the GSK conference read out was for a phase 2 trial, not a phase 3. The company is also developing three distinct vaccines for each population, rather than one single shot.

IronRidge to Begin Trading on US Platform OTCQX