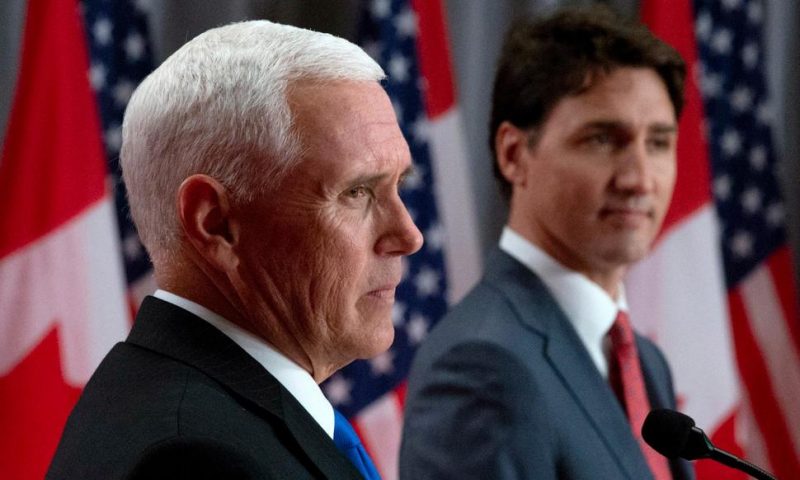 Vice President Mike Pence says the U.S.-Canada relationship has “never been stronger,” less than a year after a trade tiff had chilled the allies’ historically warm ties.

OTTAWA, Ontario — Vice President Mike Pence said Thursday that President Donald Trump is a “great friend of the Canadian people” and that the U.S.-Canada relationship has “never been stronger,” less than a year after Trump assailed Canadian Prime Minister Justin Trudeau in unprecedented attacks on America’s longtime ally.

Pence was in the Canadian capital hoping to build momentum to pass a new trade deal with Canada and Mexico. But after Pence left to return to Washington Trump tweeted that he is slapping a 5% tariff on all Mexican imports to pressure the country to do more to crack down on the surge of Central American migrants trying to cross the border.

The move could put the trade deal in jeopardy.

Trump just recently removed U.S. steel and aluminum tariffs on Canada and Mexico, clearing a roadblock to a North American trade deal that his team negotiated last year. The trade penalties were a sore point in relations that reached a low last summer when Trump called Prime Minister Justin Trudeau “weak” and “dishonest” after the Canadian-hosted Group of Seven summit of major industrial nations.

“President Trump and I believe the relationship between the United States and Canada has never been stronger and that is a reflection of his leadership and your leadership,” Pence told Trudeau.

Pence later said at a news conference that Trump is a “great friend of the Canadian people.”

“Canada, like the Europeans and the Japanese, is waiting Trump out, calculating reasonably that a new administration will be more grounded and consistent,” Wiseman said. “I don’t expect Trump will ever again be in Canada as president. So much for strong relations.”

The new trade deal , signed in November by the leaders of the three nations , is meant to replace the North American Free Trade Agreement. The pact needs approval from lawmakers in each country, and several key U.S. lawmakers and Canada were threatening to reject it unless the tariffs were removed.

Democrats in Washington now want stronger enforcement of labor standards and they oppose a provision that protects drugmakers from competition. Pence insisted that the trade deal will win approval this summer. The Trump administration triggered the process Thursday for submitting a bill to Congress that would implement the president’s new trade deal with Canada and Mexico.

“By today’s action we give evidence of President Trump’s determination to see the United States Congress consider and approve the USMCA and approve it this summer,” Pence said.

Trudeau said the talks with Pence focused on the ratification process. But Trudeau also raised the issue of women’s rights in the U.S., where several states have enacted anti-abortion measures . Pence is a well-known opponent of abortion.

“I highlighted to the vice president that there was a significant amount of concern among Canadians on the new anti-choice laws being passed in a number of American states,” Trudeau said.

Trudeau also brought up the plight of two Canadians held in China. Beijing detained ex-diplomat Michael Kovrig and entrepreneur Michael Spavor on Dec. 10 in an apparent attempt to pressure Canada to release Chinese Huawei executive Meng Wanzhou . She was arrested Dec. 1 at the request of U.S. authorities.

During recent U.S.-China trade talks, the Canadians’ cases were raised by the Americans directly with the Chinese after Trudeau pressed Trump after considerable lobbying from Trudeau and other Canadian government officials.

Pence said the U.S. has spoken out strongly about the Canadians and is renewing a call to release them, but many analysts have said the support has been largely muted.

“The prime minister and I spoke about it extensively today,” Pence said.

Pence expects Trump will meet with Chinese President Xi Jinping at the G-20 summit next month in Japan and that the U.S. will continue to urge Beijing to release the Canadians even while they deal with trade talks with China. “I expect the issue will come up again at the G-20,” Pence said.

Pence urged Canada to exclude Huawei equipment from their next-generation wireless networks, known as 5G. The U.S. claims Huawei is legally beholden to China’s ruling Communist Party, which could order it to spy on their behalf.

“We consider Huawei incompatible with the security interests of the United States of America and our allies,” Pence said.

Trudeau said Canada’s national security agencies are studying it and said Canada will make a decision based on evidence and facts. “Political considerations will not come into our reflections,” Trudeau said.

Trump also threatened to apply auto tariffs on Canada in attacks that left a bitter taste.

“U.S. relations with Canada — as with everybody else — are at best whimsical, and at worst shaky,” said Robert Bothwell, a professor of Canadian history and international relations at the University of Toronto

“We are not different from any other ally in not knowing whether the US government will support us or not,” he said. “And who knows whether car tariffs will be the next item. So no, all that Pence’s visit means is that today things look relatively quiescent; but tomorrow who knows what Trump may tweet.”