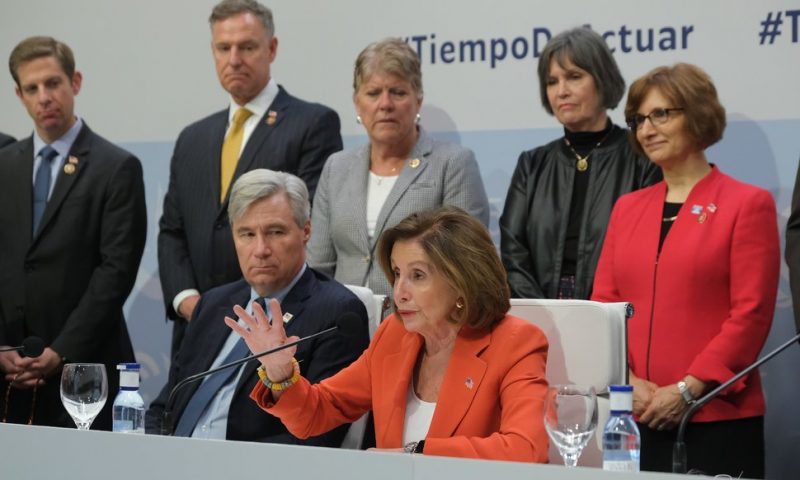 DEMOCRATIC LAWMAKERS ON Monday attended an international climate change conference to assure voters at home and allies from other nations that the U.S. is addressing climate change despite the administration’s pro-fossil fuels stance.

“By coming here we want to say to everyone, were still in,” House Speaker Nancy Pelosi of California said at the United Nations Climate Change Conference in Madrid. “The United States is still in.”

Pelosi said that Congress, states and cities are committed to tackling the climate crisis.

“Our delegation is here to send a message that Congress’s commitment to take action on the climate crisis is ironclad,” she said.

Pelosi declined to answer a question about the fast-moving impeachment inquiry into President Donald Trump, instead saying she was there to talk about how to “save the planet for future generations.”

“We, in our Congress right now, are doing many other things than reviewing the possibility of impeaching our president,” she said.

Climate change is a top issue among Democratic voters, and it is starting to get attention from young Republican voters, as well. Youth climate activists are pressuring Democratic presidential candidates to do more to address the issue, like pledging to not take contributions over $200 from oil, gas and coal industry executives.

Pelosi noted that the House in May passed a bill to keep the U.S. in the Paris climate agreement, though the measure hasn’t gone anywhere in the Senate. The Trump administration announced last month it started the formal withdrawal process from the international agreement. The process takes a year to become official, meaning it could wrap up just one day after the 2020 presidential election. It only takes 30 days to recommit to the agreement.

U.N. Secretary-General António Guterres opened up the conference by saying the world’s actions to fight climate change have so far been “utterly inadequate.”

“The point of no return is no longer over the horizon,” Guterres said. “It is in sight and hurtling toward us.”

He added that the world’s largest emitters are “not pulling their weight” when it comes to reducing greenhouse gas emissions.