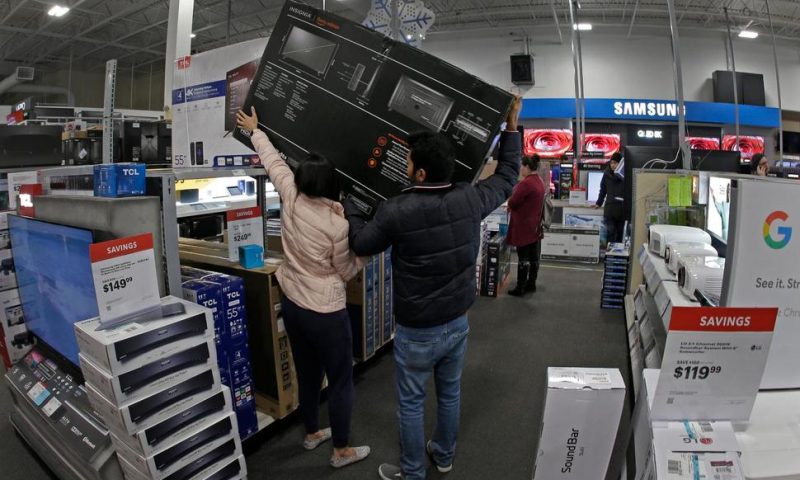 WASHINGTON — Orders to U.S. factories for big-ticket manufactured goods fell by the largest amount in six months, led by a large decrease in orders for defense aircraft and parts. A closely watched category that tracks business investment ticked up 0.1%.

Orders for durable goods fell 2% last month, the biggest decline since May, the Commerce Department said Monday. Orders have fallen in two of the past three months. October’s number was revised down to 0.2% from a 0.6% gain.

Most analysts had expected a rebound in overall orders of more than 1% for November, likely forecasting a bounce due to the end of a workers strike at General Motors. The strike lasted 40 days over two months and dragged down durable goods orders in September and October.

Orders for motor vehicles and parts did rebound, up 1.9%, but it wasn’t enough to offset the large decrease in defense aircraft orders.

Excluding defense, new orders were up 0.8%.

Orders for defense aircraft and parts fell 72.7% and are down 14% the past year.

Demand for commercial aircraft and parts fell 1.8% last month and is down 38% this year. Boeing had already suspended production of the 737 Max after two crashes that killed 346 people, then said last week it would halt Max production in January as it has become increasingly clear that the company still has numerous regulatory hurdles to clear. It did not say when production would resume. Analysts say the Boeing Max production halt could ding 2020 first quarter GDP by as much 0.5% as it ripples through the supply chain.

American manufacturing has been hurt by a prolonged trade war with China and a slowing global economy. So far this year, orders for durable goods, items expected to last at least three years, are down 1.3%. The two countries announced a “Phase 1″ agreement earlier this month, under which the U.S. will reduce tariffs and China will buy more U.S. farm products. But there are still many issues to be resolved as negotiations continue.

The U.S. economy, which has recently been flashing warning signs of a slowdown, now seems to be finishing the year stronger in spite of the isolated issues at GM and Boeing. Healthy consumer spending, a strong job market and interest rate cuts by the Federal Reserve have helped to offset the damage done by trade disputes.

The Commerce Department said Friday that the gross domestic product — the economy’s total output of goods and services — expanded at a moderate annual rate of 2.1% in the July-September quarter.

The brisk pace of spending last month is a sign that consumers, who account for about 70% of economic activity, are helping the economy offset drags ranging from President Donald Trump’s trade wars to a global economic slump. Many economists are forecasting that the economy is expanding at a decent 2% annual rate in the final quarter of the year.

US New-Home Sales Rose 1.3% in November.