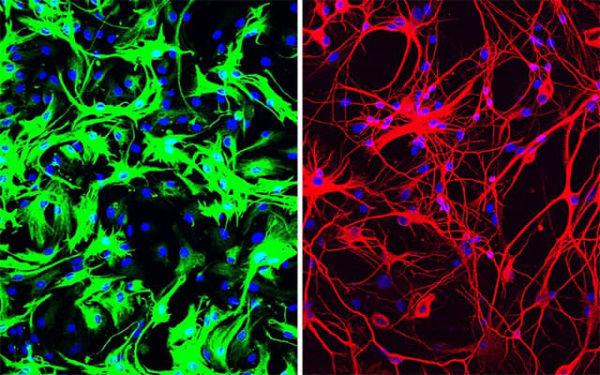 A researcher at the University of San Diego, California (USCD) made an accidental discovery several years back after he silenced a gene called PTB in mouse fibroblasts, cells in connective tissue. Within weeks, almost all of the fibroblasts were gone, and the rest had transformed into neurons.

Now, researchers in the same lab are applying that discovery to Parkinson’s disease in the hopes of creating a one-time gene therapy to replace the dopamine-producing neurons that are lost to the disease.

The UCSD team developed a gene therapy technique that cripples the ability of the PTB gene to produce a functioning protein. In mouse models of Parkinson’s, the gene therapy turned supportive cells called astrocytes into dopamine-producing neurons, erasing symptoms of the disease, the researchers reported in the journal Nature.

The gene therapy created by the UCSD team consists of a viral vector that carries a piece of DNA called an antisense oligonucleotide into cells. The DNA binds to the RNA that codes for PTB, shutting off the production of the PTB protein and allowing neurons to form.

“Researchers around the world have tried many ways to generate neurons in the lab, using stem cells and other means,” said Xiang-Dong Fu, Ph.D., professor of cellular and molecular medicine at UCSD School of Medicine, in a statement. “The fact that we could produce so many neurons in such a relatively easy way came as a big surprise.”

The UCSD team delivered the gene therapy to the midbrain of the mice and compared them with animals that got a sham procedure. The population of neurons in the brains of mice that received the treatment jumped 30%, and their dopamine levels returned to normal. The control mice saw no improvements, the researchers reported.

Within three months of the gene therapy, the treated mice were able to move their limbs normally, and they remained free of Parkinson’s symptoms for the rest of their lives, the team added.

Antisense oligonucleotides are already being used in neurodegenerative diseases. Biogen’s Spinraza to treat spinal muscular atrophy is an antisense oligonucleotide drug, as are many experimental medicines. Earlier this month, Eli Lilly formed a $20 million deal with Evox Therapeutics, which is using the approach to develop treatments for Duchenne muscular dystrophy and several neurological disorders.

Meanwhile, some research groups are exploring other gene-based approaches to Parkinson’s. Last year, a team at Mount Sinai knocked out the gene STMN2 in mice and discovered that nine other genes related to Parkinson’s were activated—a finding that could lead to new treatment pathways. Startup Prevail Therapeutics is developing a gene therapy to treat Parkinson’s that’s caused by mutations in the GBA1 gene.

The next step for the UCSD team is to optimize the gene therapy and test it in mouse models of genetic Parkinson’s. They’ve patented the technique with plans to further optimize it for testing in people.