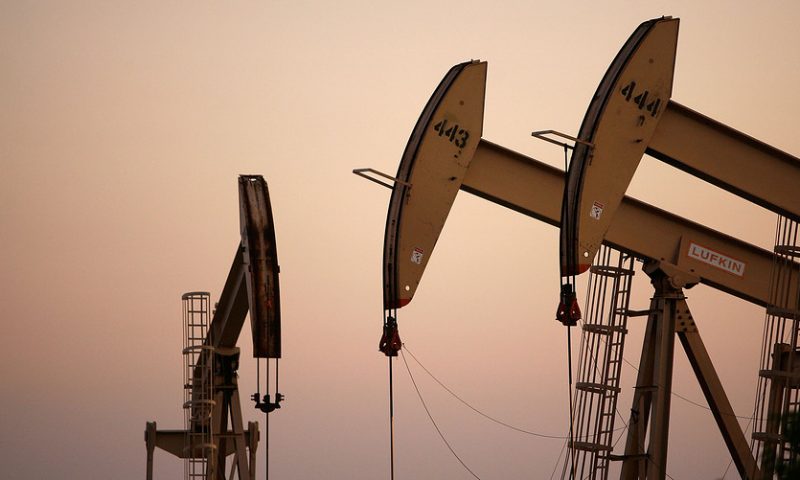 Oil futures settled higher Friday, recouping a portion of recent losses, but a day after posting their biggest one-day loss since December, prices saw their worst weekly performance of the year.

“There was a violent repricing of risk on Thursday after the rather disappointing global Flash PMIs discounted the argument that solid growth will continue to underpin demand. And that, paired with ongoing trade war tensions led to the big declines” that left the market “to finish the week deep in the red,” said Tyler Richey, co-editor at Sevens Report Research.

West Texas Intermediate crude for July delivery CLN19, +1.92% on the New York Mercantile Exchange rose 72 cents, or 1.2%, to settle at $58.63 a barrel on the New York Mercantile Exchange. The contract’s finish Thursday at $57.91 was the lowest for a most-active contract since March 12, according to Dow Jones Market Data. Front-month contract prices lost 6.8% for the week.

Crude’s slide Thursday took it below its 200-day moving average, a gauge of long-term momentum, at $60.55.

Brent shed 4.6%, while WTI was down by 5.7%, on Thursday — the biggest daily losses since December. The week’s losses for both were also the largest year to date.

Oil found some support Friday from gains in global stock markets. U.S. stocks climbed following reports that President Donald Trump may ease up on restrictions against Huawei Technologies Inc. as part of a bigger trade deal with China.

Commodity investors fear that tariff tensions between the U.S. and China could intensify a deceleration of the global economy that appears to already be at hand in Europe.

“Oil price broke out to the downside of its recent trading range [Thursday], as the weight of increasing supply and concerns about a full-blown U.S.-China trade war had traders selling as they made their way out of the door for the Memorial Day weekend,” said Phil Flynn, senior market analyst at Price Futures Group.

On Monday, there will be no regular trading for WTI on Nymex, though ICE-traded Brent crude will have shortened trading hours.

Supply factors have also weighed on prices, and that remains the key driver, argue analysts at Commerzbank, which point to the behavior in the Brent contract and a “state of marked backwardation,” where despite the significant fall in the front-month forward contract, the price differential to the following forward contract has actually widened to more than $1.

“This points to continuing tightness of supply. There are good reasons for this: Iran is exporting considerably less oil as a result of the U.S. sanctions, oil shipments from Russia are still being disrupted because of quality problems, and OPEC is keeping supply tight,” said the analysts in a research note. “It is reasonable to doubt whether Saudi Arabia will be willing to step up its output given the latest decline in prices. We therefore expect to see higher oil prices again in the near future.”

Some analysts, however, were bearish on the outlook as crude’s downdraft for week intensified after the EIA reported that U.S. crude supplies rose by 4.7 million barrels for the week ended May 17.

“Between the government inventory data pointing to an oversupplied physical market, trade tensions weighing on sentiment, and now economic data showing signs of rolling over, the bullish case for oil has little merit and the path of least resistance has shifted back in favor of the bears,” said Richey.

Data Friday from Baker Hughes BHGE, -3.69% however, did hint at potential slowdown in drilling activity, with the U.S. oil-rig count down a third straight week.

Looking ahead to the meeting of members and some nonmembers of the Organization of the Petroleum Exporting Countries, analysts have pointed out that although the Saudis have said they would not increase production, reports coming out ahead of that meeting leave some open questions. Recently, there has been speculation, though no confirmation, that OPEC will decide to change the date of the next meeting to the first week of July, from June 25-26. The output-cut agreement expires at the end of June.