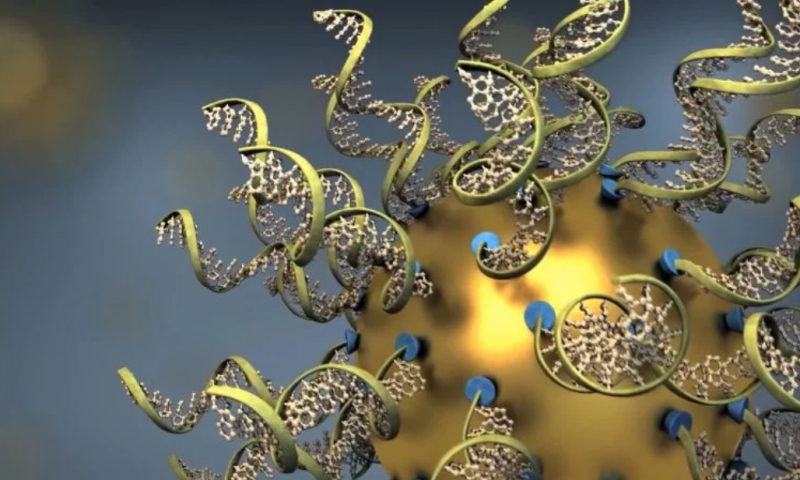 Drugs targeting cancer-promoting genes are effective in several different types of tumors, such as those of the lung and breast, but these targeted drugs have not made a dent in glioblastoma, a deadly form of brain cancer. That’s partly because the blood-brain barrier prevents many protein-based drugs and small molecules from entering the brain.

Scientists at Northwestern University have developed a novel RNA interference drug that targets the cancer-promoting Bcl2L12 gene in glioblastoma tumors. A new study, published in Science Translational Medicine, showed it could penetrate the blood-brain barrier in a small number of patients.

Based on these positive “phase 0” trial results, the team suggested that the experimental compound, called a spherical nucleic acid (SNA) drug, should undergo further testing to verify its safety and therapeutic effect.

The drug, dubbed NU-0129, consists of a gold nanoparticle core densely packed with small interfering RNA (siRNA) sequences targeting the expression of the Bcl2L12 gene. It was co-developed by the study’s senior author, Alexander Stegh, Ph.D., associate professor at Northwestern, and Chad Mirkin, Ph.D., professor and director of the International Institute for Nanotechnology, who invented the SNA platform that’s now being developed by Chicago-based biotech Exicure.

The strategy of silencing disease-related genes with RNA interference has recently emerged as a novel strategy to tackle targets that were once viewed as undruggable.

In previous studies, Mirkin and Stegh pinpointed the Bcl2L12 oncogene as a rational therapeutic target in glioblastoma, given its role in regulating programed cell death and tumor growth, as well as its increased expression in brain tumors compared with normal brain cells. They also showed that Bcl2L12-targeting SNAs could cross the blood-brain barrier in mouse models of glioblastoma and lower tumor burden and progression.

In this study, Stegh and his colleagues tested NU-0129 in monkeys before running a trial in eight patients with recurrent glioblastoma.

Patients received a single intravenous injection of NU-0129 at a small dose a day before their surgery. The researchers then analyzed tumor tissue from six of the patients.
By tracing the drug’s gold core, the team found that NU-0129 accumulated in tumor-associated blood vessel surface cells and was taken up by tumor cells, as well as related macrophages.

The tumors showed reduced expression of Bcl2L12 after treatment. What’s more, the researchers discovered increased activation of caspase-3 and expression of p53 protein. Caspase-3 and p53 are crucial regulators of programed cell death, and abnormalities in the two proteins are often hallmarks of cancer development.

Exicure has developed several drug candidates against genetic disorders and cancer based on its SNA platform. These include cavrotolimod, or AST-008, which is an SNA consisting of toll-like receptor 9 agonists. The drug recently secured an orphan drug designation for Merkel cell carcinoma after showing promising in early clinical trials when used in tandem with Merck’s immuno-oncology drug Keytruda.

The Northwestern researchers suggested in their study that future research into NU-0129 should evaluate the drug’s safety for long-term use as well as its efficacy as a monotherapy and in combination with current standards of care such as radiation and chemotherapy.

Enzychem Lifesciences Selected to Participate at the 15th New York Health Forum: Investing in Space – Next Frontier of Healthcare