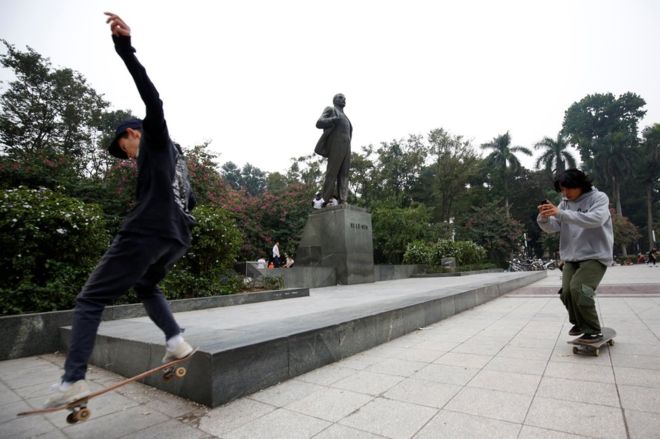 US President Donald Trump says his second summit with North Korean leader Kim Jong-un will be held in the Vietnamese capital Hanoi.

The two men will meet on 27-28 February for talks expected to focus on persuading the communist state to give up its nuclear weapons programme.

Modern relations with Vietnam are seen as a model for US ties with the North.

A US envoy held “very productive” talks with the North to prepare for the new summit, Mr Trump said.

Both sides said they were committed to denuclearisation but gave no details of how this would be carried out or verified.

Mr Trump announced in his State of the Union address on Tuesday that he would meet Mr Kim in Vietnam but did not say where exactly the summit would take place.

On Friday evening Washington time, he tweeted that they would meet in Hanoi for “advancing the cause of peace”.

Hanoi was the capital of communist North Vietnam during the bloody conflict between 1965 and 1973 which Americans refer to as the “Vietnam War” and the Vietnamese call the “American War”.

Since the war, in which millions of civilians and combatants died, reunified Vietnam has rebuilt relations with America while remaining a communist state.

North Korea isolated itself from the outside world after the Korean War ended in 1953, and only began to mend ties with US-backed South Korea in recent years.

South Korean presidential spokesman Kim Eui-kyeom said this week that Vietnam was the best choice of host for the next summit because it and America used to “point a gun and knife at each other”, Reuters news agency reports.

Vietnam is also seen as a model of economic and political reform for the North to follow.

An unnamed White House official with knowledge of the second summit’s planning told CBS News Vietnam had been chosen in part because of its good relationships with both the US and North Korea.

What preparations are being made?

US envoy Stephen Biegun spent three days in discussions on the Korean peninsula.

In the Northern capital Pyongyang, he met his counterpart Kim Hyok-chol and discussed the “Singapore summit commitments of complete denuclearisation”, a US state department statement says.

The two envoys will meet again before the summit. Mr Biegun warned of “some hard work to do with the DPRK [North Korea] between now and then”.

“I am confident that if both sides stay committed, we can make real progress,” he told reporters.

Experts caution that despite Mr Trump’s assertion that North Korea is no longer a nuclear threat, the country has never said it would give up its nuclear weapons programme without similar concessions from the US.

The US wants North Korea to make a full declaration of all its nuclear weapons facilities and commit to destroying them, under international supervision.

In a speech at Stanford University last week, Mr Biegun said the US would not agree to lift sanctions until this happens but he indicated it could provide assistance in other ways, saying: “We did not say we will not do anything until you do everything.”

He also said Kim Jong-un had previously committed to “the dismantlement and destruction” of all North Korea’s plutonium and uranium facilities, which provide the material for nuclear weapons.

The UN has warned that North Korea is continuing its nuclear programme and breaking sanctions.

A confidential report to the Security Council earlier this week said actions including the illegal transfer of banned goods at sea could make sanctions – the international community’s main way of putting pressure on North Korea – “ineffective”.

The report said there had been a “massive increase in illegal ship-to-ship transfers of petroleum products and coal”, where material is moved from non-North Korean ships out at sea to evade monitoring.

The international sanctions against North Korea are designed to severely limit its import and export abilities, with the aim of putting pressure on the country to give up its nuclear ambitions.