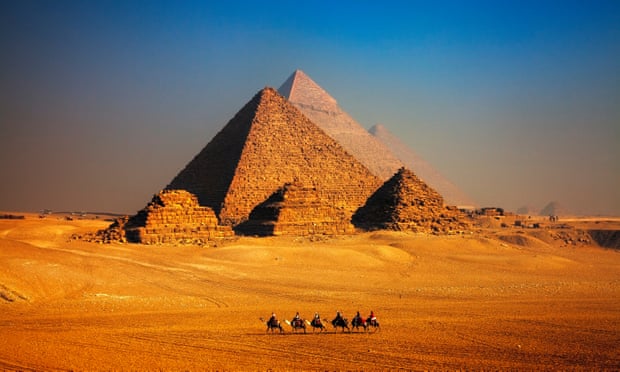 The mystery of how, exactly, the pyramids were built may have come a step closer to being unravelled after a team of archaeologists made a chance discovery in an ancient Egyptian quarry.

Scientists researching ancient inscriptions happened upon a ramp with stairways and a series of what they believe to be postholes, which suggest that the job of hauling into place the huge blocks of stone used to build the monuments may have been completed more quickly than previously thought.

While the theory that the ancient Egyptians used ramps to move the stones has already been put forward, the structure found by the Anglo-French team, which dated from about the period that the Great Pyramid of Giza was built, is significantly steeper than was previously supposed possible.

They believe the inclusion of the steps and the postholes either side of a rampway suggests the builders were able to haul from both directions, rather than simply dragging a block behind them. The team believes those below the block would have used the posts to create a pulley system while those above it pulled simultaneously.

They believe the find to be significant because they say it suggests the work could have been done more quickly, albeit still involving the heavy labour of a large number of people.

“The system we have discovered would allow more people to exert force at one time, so it means you would be able to exert more force and move the blocks more quickly,” said Dr Roland Enmarch, a senior lecturer in Egyptology at the University of Liverpool and the co-director of the project that made the discovery, the Hatnub Survey.

He told the Guardian that he and his colleagues, including his fellow director Dr Yannis Gourdon of the Institut Français d’Archéologie Orientale (IFAO), intended to publish their findings in a peer-reviewed journal in the near future. The find was made in late September, meaning that has not yet been possible.

He said the alabaster quarry itself, as well as the inscriptions they were there to study, had been known to Egyptologists for a long time, having first been found by Howard Carter – the discoverer of Tutankhamun’s tomb.

His team’s original focus was not on the ramp leading down into the quarry, but on properly documenting the inscriptions found there. But their attention was soon drawn to the former’s construction – and what it could tell them about how pyramids were built.

They said the inscriptions allowed them to date the ramp to around the time of the Pharoah Khufu, or Cheops, who built the Great Pyramid. While there is no proof the method was used to construct that monument, Enmarch said it was reasonable to suggest it would have been if the technique was in use in Egypt at the time.