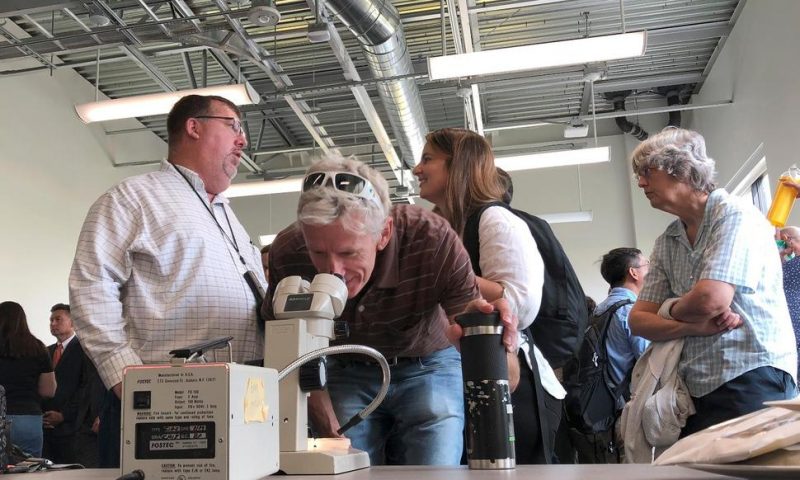 California is opening a new front in the battle against a disease that has decimated citrus groves across the world and looms as a threat to the state’s orange crop.

RIVERSIDE, Calif. — In a lab southeast of Los Angeles, researchers are opening a new front in the yearslong battle against a tiny pest that has wreaked havoc on citrus groves around the world.

California citrus growers and packers and the University of California, Riverside on Thursday marked the opening of an $8 million lab dedicated to finding a solution to the tree-killing disease known as Huanglongbing that has ravaged groves in Florida, Brazil and China.

Until now, scientists said they haven’t been able to take a close look at the disease in California because of strict measures aimed at preventing contagion since it hasn’t reached the state’s commercial groves.

That will change with the Biosafety Level-3 lab near the campus, which was funded by growers and will let researchers study the bacteria carried by the Asian citrus psyllid in a secure environment.

“It’s kind of a race against time,” said Dave Smith, general manager of Booth Ranches in Orange Cove, California, and chair of the California Citrus Research Foundation, which raised the money for the lab.

Huanglongbing was detected more than a decade ago in Florida and has walloped the state’s orange production. This year, Florida expects to produce 70 million boxes of oranges, down from 247 million in 2003 before the disease took hold and, along with hurricane damage and rising development, decimated the industry, said Andrew Meadows, a spokesman for Florida Citrus Mutual.

The disease — which causes yellow spotting and veins and misshapen and bitter fruit — has dealt a heavy blow to the citrus industry in many countries, but it has had a lesser impact in California. About 1,600 trees have been infected in Southern California backyards, but commercial orchards further north have so far been spared.

Government authorities have adopted a spate of measures to limit the spread, including quarantines and taking out sick trees.

Growers in California — which supplies more than 80 percent of the country’s fresh citrus — also have been working to stave off the threat. Farmers now cover fruit transported throughout the state to prevent the psyllid, an insect that feeds on trees and can carry the disease, from moving to new communities.

In Ventura County, growers spray pesticides to get rid of the psyllid. But the insects are becoming more pesticide-resistant and, in the process, helpful insects are also getting wiped out, said Harold Edwards, president of Limoneira in Santa Paula, California.

“Eventually, we’re going to lose that fight,” he said.

California’s more than $3 billion-a-year citrus industry dates back more than a century. One of the original trees brought to the city of Riverside, known as the parent navel tree, still stands in a park, though officials have covered it to stave off infection.

Georgios Vidalakis, director of the Citrus Clonal Protection Program at University of California, Riverside, said citrus boomed in California in the late 1800s. In the decades that followed, researchers in Riverside started a citrus breeding program, which helped develop new varieties, and a citrus collection, which now has more than 1,000 kinds of trees, he said.

Vidalakis, a plant pathologist, oversees a program aimed at ensuring trees don’t introduce diseases into the region. But without the ability to study the illness, research was hampered, he said, until experts and growers joined together to build the lab.

“This disease is like nothing we have ever faced as plant pathologists,” he said. “We need all hands on deck.”

Amid rows of leafy-green trees in the campus’ citrus collection, curator Tracy Kahn points to a small one covered with green pods that she said might help develop disease-tolerant citrus. But there’s work to be done and not enough time available at a secure lab in Northern California to test new varieties against the disease, she said.

“We have things now that we want to put in there, but it hasn’t been ready, until now,” she said.

Researchers in Florida and elsewhere have also been searching for a cure. But the states have different growing climates and citrus varieties — Florida oranges are largely for juice while California dominates the fresh fruit market — and may demand different solutions, experts said.

“We’re looking for prevention and a cure,” said Joel Nelsen, interim executive director of the California Citrus Research Foundation. “If we don’t produce fresh citrus in California, nobody gets any citrus.”

Trump Organization Gets OK for 550 New Houses in Scotland